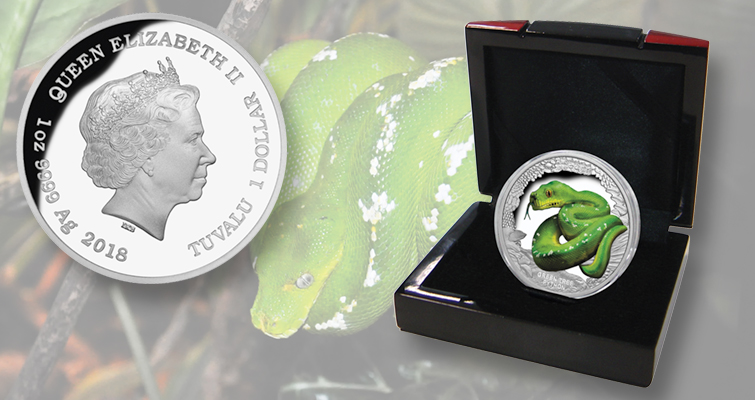 The colorful green tree python is not venomous, making it a popular choice among snake lovers searching for a pet. The animal is featured on a 2018 silver dollar from Tuvalu.

A popular python often kept as a pet is featured on the latest coin in Australia’s Remarkable Reptiles series.

The green tree python (Morelia viridis) is a species of python native to the Cape York Peninsula of Australia, New Guinea, and islands in Indonesia.

Described by Hermann Schlegel in 1872, it was known for many years as Chondropython viridis.

As its common name suggests, it is a bright green snake that lives generally in trees. It can reach 2 meters (6.5 feet) in length and 1.6 kilograms (4 pounds) in weight, with females slightly larger and heavier than males.

The green tree python mainly hunts and eats small reptiles and mammals. It is a popular pet and numbers in the wild have suffered because of large-scale smuggling of wild-caught green tree pythons in Indonesia.

Despite this, the green tree python is rated as of least concern on the IUCN Red List of Endangered species.

These snakes have a particular way of resting on the branches of trees: they loop a coil or two over a branch in a saddle position and drape their head in the middle. This trait is shared with the emerald tree boa (Corallus caninus) of South America. This habit, along with their appearance, has caused people to confuse the two species when encountered outside their natural habitats.

The coin’s reverse carries a full color, naturalistic portrait of a sinister-looking green tree python in its natural surroundings, framed by a border of reptilian scales, teeth, claws and skin. The legend GREEN TREE PYTHON defines the theme.

The obverse bears the Ian Rank-Broadley effigy of Queen Elizabeth II, in crowned profile facing right. This portrait shows the queen wearing a tiara and pearl earrings. The legend QUEEN ELIZABETH II, the date of issue and denomination also appear, while the legend 1 OZ 9999 AG guarantees the weight and purity.

The Proof .9999 fine silver dollar was issued for Tuvalu by Downies, and struck at the Perth Mint. The coin weighs 31.101 grams and measures 40.6 millimeters in diameter. It has a mintage limit of 5,000.

Distributor Talisman Coins offers the coin for $69.95.
To order, or for more information, visit the firm's website. 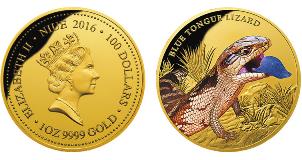 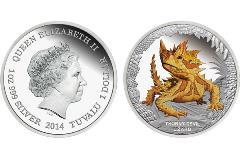