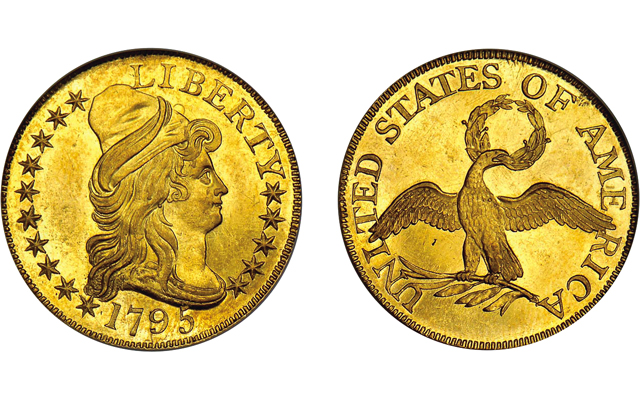 The first die variety of 1795 Capped Bust, Small Eagle half eagle struck (Bass-Dannreuther 1) from the first delivery of federal gold coins in July 1795.

The Joys of Collecting column from June 29 issue of Coin World:

In Colonial and early Federal times gold coins were important in commerce. The gold escudos (worth about $2) and their multiples, were essential in large transactions, especially in the export trade. Even more important in terms of use were the silver real or bit worth 12½ cents and the 8-real coin or dollar. These coins were of the Spanish monetary system and were produced there as well as in that country’s New World possessions. Coins of Great Britain, Holland, France, and other countries were in wide use, and many were made legal tender by the American government.

The Mint Act of April 2, 1792, gave specifications for a planned federal coinage from the half cent upward. Three gold coins were listed: the eagle or $10 and its fractional parts the $2.50 quarter eagle and $5 half eagle. The composition of such pieces was set as 11 parts of pure gold to 1 part of alloy (years later it was changed to 90 percent gold and 10 percent alloy).

Surety bonds of $10,000 each were required for Chief Coiner Henry Voigt and  Assayer Albion Cox, an amount equal to the best part of $1 million today. The bond requirements were eventually adjusted and met.

It was not until about May 1795 that David Rittenhouse, director of the Mint since its inception, assigned engraver Robert Scot to produce half eagle dies. Rittenhouse left the Mint at the end of June and was replaced by Henry William DeSaussure, who ordered that gold coin production should begin. On July 31, 744 half eagles were delivered, followed by subsequent amounts through September totaling 8,707 pieces for the year.

The Small Eagle reverse design was apparently taken from a first century B.C. Roman onyx cameo depicting an eagle perched on a palm branch, its wings outstretched, holding aloft a circular wreath in his beak.

In 1795, at least eight obverse dies were made with that date. Not all were used. 1795-dated dies were used in later years as well, including in 1798 in combination with the new Heraldic Eagle reverse. Over a dozen different die combinations are known.

Published mintage figures of early U.S. coins often differ from the number of coins struck bearing a particular date, as dies were kept in service until they became unusable.