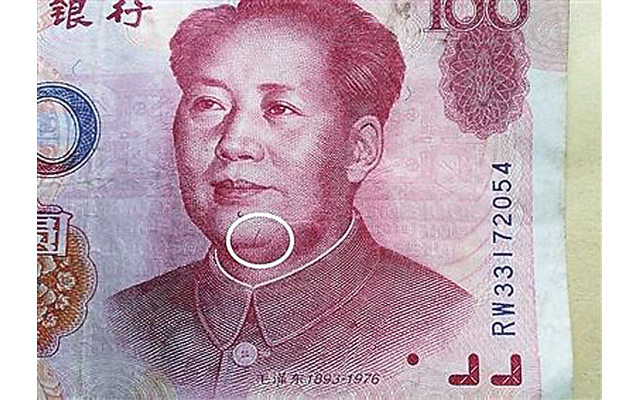 Chinese media were agog over a report that an auto mechanic from Chongqing had discovered an apparent error note. The note has a scar-like mark (circle) on Mao Zedong’s chin.

While U.S. paper money error collectors pay serious attention the few times an error sells for as much as $50,000, Chinese media was running rampant early in June with a story about an error note appraised for nearly five times that.

Numerous reports tell of a 36-year-old auto mechanic in Chongqing named Zheng who has had the note in his pocket for years. Zheng reportedly received the 100-yuan ($16) note printed in 1999 as part of his wages. When he noticed that below and to the right of the mole on Chairman Mao Zedong’s chin was a scar-like line, he decided to keep it.

When Zheng heard that someone nearby had a note with a similar error and it was worth 1 million yuan ($161,340), he posted pictures of his bill online and the offers are said to have started flowing in. One auction house estimated that the bank note was worth up to 1.5 million yuan ($240,000), although another one pointed out that because the bill was relatively new it might not bring that much.

At press time, the note, which appears to be in remarkable condition considering it has resided in a pocket for years and Chongqing has a humid subtropical summer climate, remained with its owner. He said he wants to wait for the best offer.