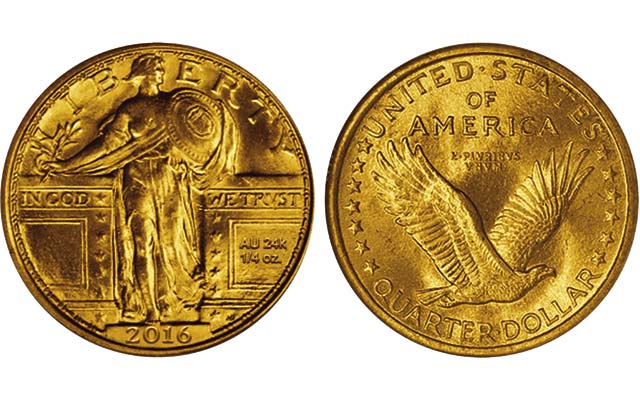 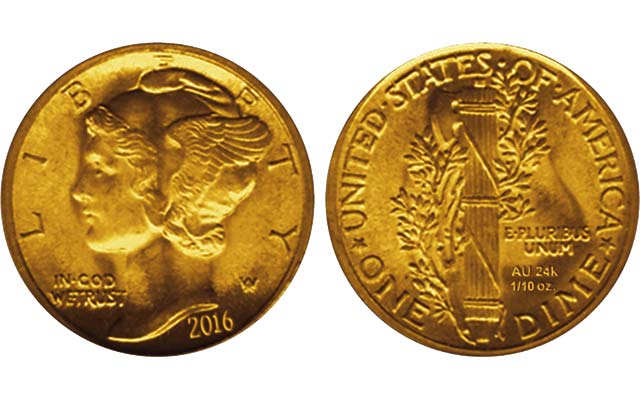 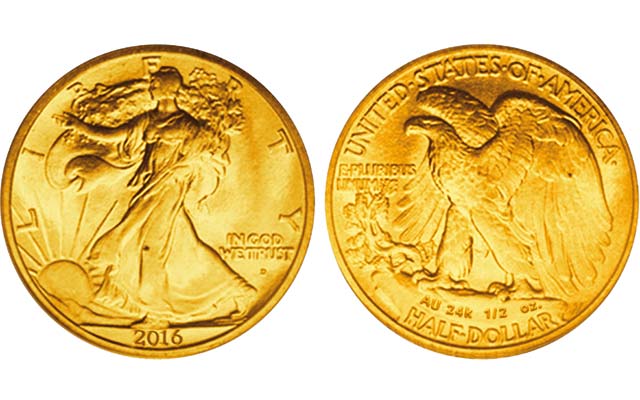 The United States Mint has released image mock-ups for the 24-karat gold 2016 Winged Liberty Head dime, Standing Liberty quarter dollar and Walking Liberty half dollar to be issued as numismatic products marking the centennial anniversaries of all three coins.

The three coins were all introduced in 1916 into general circulation in .900 fine silver. Coin World's earlier coverage of the Mint's potential plans for 2016 for the centennial anniversaries can be found here.

The 1916 dime and half dollar were originally designed by sculptor Adolph A. Weinman and the 1916 quarter dollar by sculptor Hermon A. MacNeil.

The gold 2016 quarter dollar is to feature MacNeil's original Bared Breast obverse from 1916, not the modified Mailed Breast subtype introduced in 1917.

On all three coins, the fineness is shown in the mock-up images as 24K rather than the often used inscription ".9999 fine gold."

On the 2016 Walking Liberty half dollar, the fineness and weight will be reflected on the reverse, beneath E PLURIBUS / UNUM as AU 24K / 1/10 OZ.

AU is the atomic symbol for gold in the Periodic Table.

For the 2016 Standing Liberty quarter dollar, the weight and fineness is reflected in the mock-up images as AU 24K / 1/4 OZ. in the framed area just below WE TRVST.

For the 2016 Walking Liberty half dollar, the weight and fineness is depicted in an arc on the reverse below the eagle and above HALF-DOLLAR as AU 24K 1/2 OZ.

The digits for the date 2016 appear to exhibit serifs, with the numerals for the dime appearing taller or stretched when compared with the quarter dollar or half dollar.