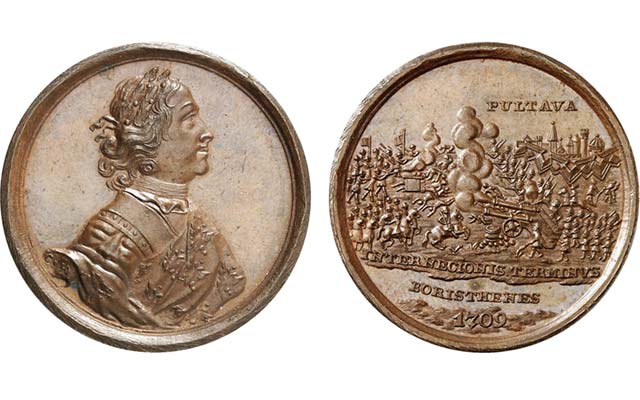 The market for Russian coins and medals, especially at the middle-to-lower end, remains weak.

The firm on March 27 announced the sale results, stating in a press release that, “The prices realized bear witness to the fact that the [ruble] has significantly fallen in value against the euro. Mainly the coins and medals in the low and mid-range price segment have lost a number of buyers.”

This presents an advantage for buyers at the moment, according to the firm.

“When was the last time a bronze medal with the portrait of Peter I on the Battle of Poltava ... was available for [a] mere 300 euros?” the firm asked in the press release.

The medal in question, a restrike of a 1709 medal for the battle, was graded Extremely Fine to Brilliant Uncirculated by the firm. It realized a hammer price of €300 (about $319 in U.S. funds).

Interested in Russian material and the the Russian market? Read these Coin World stories!