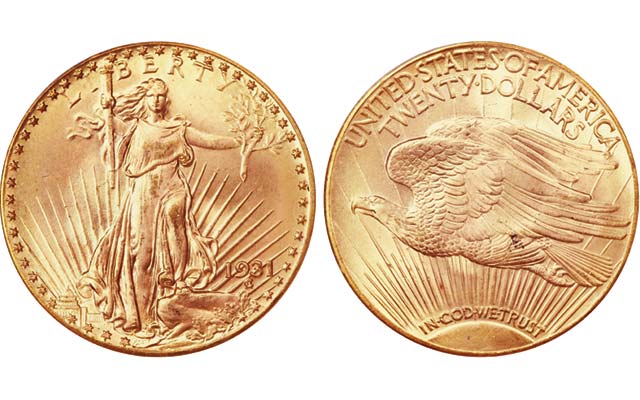 As the world’s economy was collapsing, Frederick Simpich, assistant editor of the National Geographic Magazine, explored the nature of gold for an article, “Men and Gold,” published in the April 1933, issue of the magazine.

Americans were allowed to keep $100 face value in gold coin, jewelry and numismatic items. The rest was eventually melted, converted to ingots and shipped to Fort Knox.

But as Simpich researched his subject from 1931 to 1933, gold was seemingly everywhere. Details in the article place his Philadelphia Mint visit in the first half of 1931, when the Mint was producing 200,020 1-balboa coins for Panama.

Simpich noted that while technically $450 million in gold coins were in circulation, few people actually used them. “It does not really circulate, because most people prefer the more convenient paper dollar,” he wrote.

At the Philadelphia Mint, Simpich wrote, “You feel a vague sense of the Nation’s power as you walk through vault after vault. ... Tiers of gold bars and bags of gold coin are piled ceiling high. There is so much gold that no one man could even count it; he wouldn’t live long enough. Farther along, in the big minting room, you stop beside a coining machine. From it flows a bright stream of ‘Balboas,’ which are being minted for Panama. The 27 machines in that room, in an eight-hour day, can stamp 1,260,000 coins.”

Today, the 1931 silver-dollar size balboas sell for about $100 each in Uncirculated. The double eagles are worth a bit more. Of the nearly 3 million gold $20 pieces minted in 1931, only an estimated 100 to 150 survive. The rest fell victim to Mr. Roosevelt’s order and were melted.