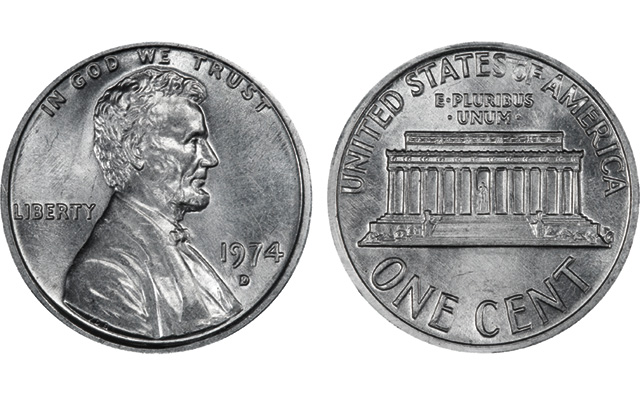 A federal judge in California has ruled that two men can continue their quest to own and potentially sell a 1974-D Lincoln aluminum cent. The court held that it is plausible that the coin could have left the Denver Mint legally.

The contested 1974-D Lincoln aluminum cent was among items Randall Lawrence inherited from his father.

In September 2013, McConnell, a coin dealer in La Jolla, Calif., purchased the 1974-D aluminum cent from Randall Lawrence and the coin was set to be a highlight of Heritage’s 2014 Central States Numismatic Society auction, but is withdrawn after the government took steps to seize the coin. The piece has been graded Mint State 63 by Professional Coin Grading Service.

As Coin World’s Paul Gilkes reported in 2014, although there is an absence of Mint records on the production of aluminum Lincoln cents at the Denver Mint, the die setter for the testing, Benito Martinez, claims to have struck between 10 and 12 1974-D aluminum cents. These were struck one at a time, on planchets with upset rims that were supplied by the Philadelphia Mint.

Martinez told Coin World that he struck the 1974-D aluminum cents with regular production dies under the supervision of Harry Bobay, a Denver Mint production foreman.

Although more than a million 1974 Lincoln aluminum cents were struck at the Philadelphia Mint and a small number handed out to members and staff of the House and Senate Banking Committees to support the new composition, no Denver Mint aluminum cents were known until this piece surfaced.

When Congress decided to not adopt aluminum as a composition for circulating coins, the U.S. Mint melted down nearly all of the examples, although Philadelphia Mint examples are known.

In their filing, Lawrence and McConnell state that the Denver Mint celebrated Harry Lawrence’s retirement by giving him a clock engraved with his name, with the hours represented by examples of 90 percent silver coins struck at the Denver Mint. Further, they contend that the Mint commemorated his retirement by “allowing him to keep certain error coins struck in Denver which he had accumulated, and one specimen of the 1974-D aluminum cent.”

A matter of plausibility

A motion for summary judgment allows a court to dismiss a case for “failure to state a claim upon which relief can be granted.” While the court noted that it is unlawful for any person without proper authority to remove property from the U.S. Mint, the court noted that there was a possibility that Harry Lawrence lawfully obtained the item.

The two men contend that because the government gave the coin to Harry Lawrence and that Randall Lawrence had undisturbed control of the coin for the past 34 years, this creates a presumption of title and requires the recognition of ownership rights of the coin.

The government challenges this, believing that the men have not, and cannot, assert “facts that would support any scenario under which Plaintiffs could plausibly be in lawful possession of the subject piece.” The government contends that the mere possession of the 1974-D aluminum cent is not enough to divest the government of its ownership and that “no authorization exists — and none is alleged — whereby any Government official could have lawfully allowed Mr. Lawrence to obtain or keep the subject piece that he possessed through advantage of his federal employment with the United States Mint.”

Lawrence’s and McConnell’s attorney, Armen Vartian, said this March 31: “The Government’s position was that nobody can legally own a 1974 Aluminum Cent because Congress never authorized these coins to be issued as money. The Court decided that this position was overly simplistic, and did not preclude Harry Lawrence having legal title to his 1974-D specimen, which Denver Mint officials let him take with him at his retirement along with a group of error coins and an engraved clock with Denver Mint silver coins in place of the hours. My clients look forward to the discovery phase of the case, where undoubtedly the numismatic community will learn a great deal more about the Aluminum Cents.”

This case began more than a year ago. According to the complaint, the U.S. Mint’s chief legal counsel, Daniel P. Shaver, sent separate letters dated Feb. 26, 2014, to Lawrence and McConnell demanding the return of the 1974-D cent.

The two men filed a motion for declaratory judgment on March 14, 2014, that asked the court to declare the government’s legal claim to own the cent as invalid and to confirm the two men as legal owners of the piece.

On June 3, 2014, the U.S. Department of the Treasury, U.S. Mint, and the United States of America, together filed a motion to dismiss the complaint. On July 23, the court granted the government’s motion to dismiss the complaint, contending that the two men did not allege sufficient facts to support a legal conclusion that they were owners of the cent and that they had the right to sell that coin at a public auction.