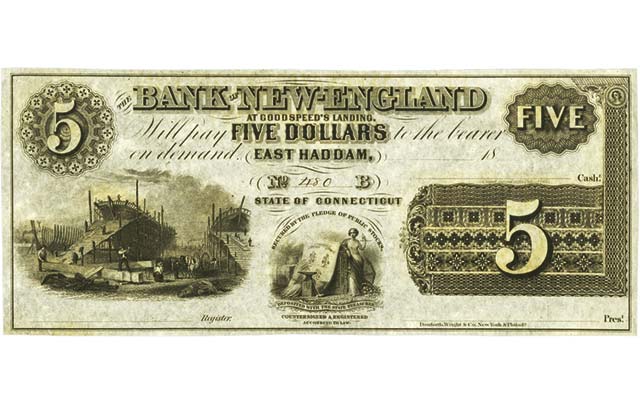 This $5 remainder note was printed for The Bank of New England at Goodspeed’s Landing (East Haddam, Conn.), but was never issued.

Sometimes, while looking through auction catalogs offering privately produced obsolete notes, a collector will notice in an auction lot description the term “remainder note.” Collectors are often unclear about what the term actually means.

A remainder bank note is a note that has been prepared for issue, but not issued for one reason or another. Maybe the issuer of the notes failed, or maybe it merged with another issuer. Or it just ceased issuing notes.

Remainder notes often show up in the collecting realm of privately issued obsolete notes. Obsolete notes were issued in the 18th and 19th centuries by private banks and other businesses, and even by state and local governments.

Many private note-issuing banks eventually failed for lack of funds or simply stopped issuing the notes, thus the “obsolete” moniker.

Beginning in the 1860s, obsolete notes began to be replaced in circulation with paper money issued by the federal government.

Obsolete notes are actually available in several forms: “issued,” meaning they were placed into circulation; “unissued,” which are “remainders” — notes that were printed for circulation but not released for one reason or another; and “proofs,” which are prototypes of a note.

Because remainder notes were not released into circulation, they are often in better shape than circulated or issued notes from the same bank.

These items offer the same beautiful, often custom designed, vignettes found on most obsolete notes. The note illustrating this article is an example of an interesting vignette of ship building along with a fun bank name — The Bank of New-England at Goodspeed’s Landing — which was located in East Haddam, Conn. Goodspeeds’ Landing was for steamboats docking on the Connecticut River to access the village established in 1734.