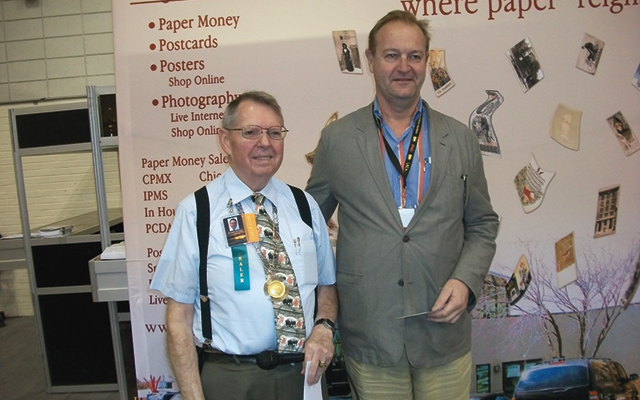 Also during the show, IBNS presented literary awards for articles published in the IBNS Journal during 2013 and books published that same year.

Peter Symes was awarded the Fred Philipson Award, the IBNS’s top literary award to recognize the best article published in the journal during the previous year.

Symes winning article was “Banknotes in Abyssinia and Ethiopia: A Story of British and American Interests.”

The first-place book of the year award went to Printed in Palestine: The Second World War Emergency Notes of Syria, Lebanon and Djibouti, printed by the Government Printer Palestine by Raphael Dabbah.

The second-place literary award for articles published in the IBNS Journal in 2013 went to Christian Funke for “Tokens of Transformation and Contesting Power: Iranian Banknotes in Revolution and Turmoil” and third place was awarded to Mahdi Bseiso for “A Glimpse into Jordan’s Currency through its 500 fils and 1.2 dinar notes.”

? Stefano Poddi, “Coupons from Italian POW Camps in British India a Reminder of a Harsh Era.”

? ?Peter Symes, “The Sixth and Seventh Issues of the Banknotes of Bangladesh.”