Customizing a collection of national bank notes by state, alphabet 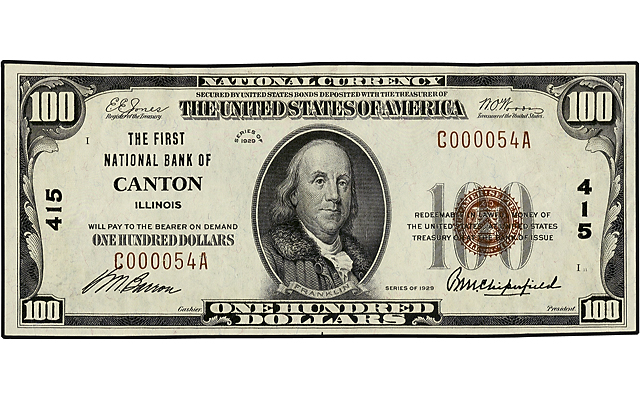 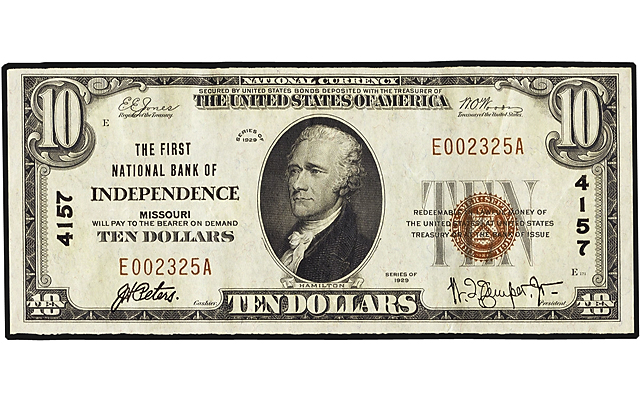 This $10 note issued by the First National Bank of Independence (Missouri) sold for $646.25 in a Heritage sale on Sept. 8, 2014. The note was graded by the firm as Extremely Fine.

Editor's note: The following is the second of a three-part Coin World series about collecting national bank notes using knowledge of U.S. geography and the alphabet, prepared by Michele Orzano for the November 2014 monthly edition of Coin World.

By combining knowledge of the alphabet with a bit of geography, a collector could start on a journey to collect small-size national bank notes in a nontraditional, but no less fun, manner.

Some letters of the alphabet will need to be skipped at first (B, E, J, Q, X and Z). Now let’s move on to selecting alphabetically the states that had national banks that issued small-size notes. State names starting with A through G were covered in the first part of this feature.

The higher the denomination and the better the condition, the higher the asking price, generally. Consider two examples of small-size notes issued by the Bishop First National Bank that sold in 2014 by Heritage Auctions.

From the list of “I” states — Idaho, Illinois, Indiana, and Iowa — I selected Illinois, again for the sheer number of national banks located in that state.

In Illinois, the First National Bank of Canton was located in the city that was founded in 1825. It is located in the west central part of the state. Canton is where William Parlin and his brother-in-law, William Orendorff founded the Parlin & Orendorff Plow Works in 1860. The company was later sold to International Harvester.

I had only two choices for the letter “K” — Kansas and Kentucky — and I chose the Thomas County National Bank of Colby, another intriguing bank name, to represent Kansas.

A post office was established in Colby in 1882 and the town was officially established in 1884. The county was named after a Union officer during the Civil War — Maj. Gen. George Henry Thomas. Five of the townships in the county are named for Kansas soldiers killed under his command at the Battle of Chickamauga.

Louisiana was an easy choice, especially when I got to dive into the history of the hometown of the First National Bank of Lake Charles. The city, founded in 1861, is about a three-hour drive west of the perhaps better-known city of New Orleans.

Then the big lineup of the “M” states: Maine, Maryland, Massachusetts, Michigan, Minnesota, Mississippi, and Montana.

I chose Missouri, on behalf of family and friends, and the First National Bank of Independence sounded like a good choice.

The town, established in 1827, at one time served as the departure point for three overland trails — Santa Fe Trail, Oregon Trail and the California Trail. It was also the hometown of Harry S. Truman, the 33rd president of the United States.

Next up, the “N” states — I picked Nebraska though I could also have selected notes from Nevada, New Hampshire, New Jersey, New Mexico, New York, North Carolina or North Dakota.

For Nebraska, the First National Bank of Gresham supplied small-size national bank notes. The tiny village of 200-plus souls was founded in 1887. Gresham is a little more than 50 miles northwest of Lincoln.