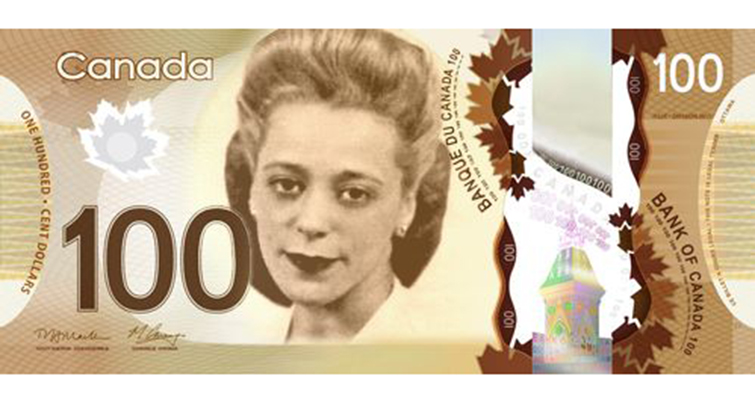 Viola Desmond, known by many as the Canadian Rosa Parks because of her decision to sit in the whites-only section of a Nova Scotia movie theater in 1946, will be the subject of the next Canadian $10 note. Shown is a private rendition of a $100 note.

Viola Desmond, known by many as the Canadian Rosa Parks because of her decision to sit in the whites-only section of a Nova Scotia movie theater in 1946, will be the subject of the next Canadian $10 note. The polymer note will enter circulation in late 2018 as the first in a new series.

The announcement by the Bank of Canada on Dec. 8 noted that this will be the first time that a portrait of a Canadian woman will be featured on a regularly circulating Bank of Canada note.

Desmond emerged as the choice of Minister of Finance Bill Morneau from a short list that included four others — poet E. Pauline Johnson; Elsie MacGill, who received an electrical engineering degree from the University of Toronto in 1927; Quebec suffragist Idola Saint-Jean; and 1928 Olympic track and field medalist Fanny Rosenfeld. The finalists were culled from over 26,300 submissions from across Canada, reduced to 461 eligible candidates.

A mandate for the new $10 note was to reflect the broader themes of social justice and the struggle for rights and freedoms. Desmond was a successful Nova Scotia businesswoman who was jailed, convicted and fined for her actions in the theater. The publicity that followed when she unsuccessfully attempted to have her conviction overturned brought public attention to the racial discrimination she had experienced.

The bank said that, to choose the theme of the next $5 note, a similar public process will be used, and that Canada’s first prime minister, Sir John A. Macdonald, and its first francophone prime minister, Sir Wilfrid Laurier, will be honored on the higher-value $50 and $100 notes when they are redesigned. The $20 note will continue to feature the reigning monarch.