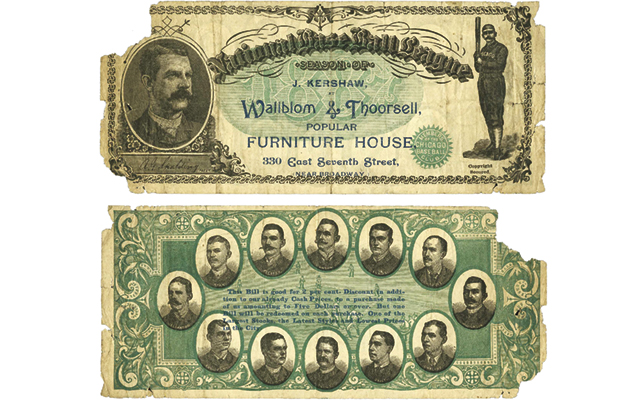 A portrait of Chicago baseball great A.G. Spalding is depicted on the face of this advertising note issued by a furniture store in St. Paul, Minnesota. The back design shows the players of the Chicago White Stockings baseball team from 1887. The note, graded Fine by the auction company, sold for $322 in a 2009 Heritage sale.

The hobby of paper money can lay claim to a place in the baseball universe with advertising notes that used a baseball-theme in their designs.

Advertising notes were often issued by businesses, and most were “good fors” offering customers a discount as an incentive to buy. Throughout the late 1880s and 1890s, a number of businesses took advantage of the popularity of baseball to attract customers.

One example, an advertising note for the Wallblom & Thoorsell Furniture House in St. Paul, Minn., features a portrait of Chicago baseball great Albert Goodwill Spalding on the face.

Spalding played on the Boston Red Stockings team and was a pitcher for the Chicago White Stockings; he was active as a player on those two teams during the 1870s. Later he served as president and part-owner of the Chicago team. He’s credited with writing the first set of official baseball rules. He also co-founded the Spalding sporting goods company.

The back design of the furniture store’s advertising note features several vignettes of the players of the Chicago White Stockings baseball team from 1887, including Billy Sunday, Frank Sylvester “Silver” Flint and Adrian “Cap” Anson. Sunday, who played on Chicago and Philadelphia professional baseball teams from 1883 to 1890, may be today the best known player from the team. He eventually traded the baseball field for the pulpit. The back design also states that the note is good for a 2 percent discount on purchases of $5 or more.

Advertising notes are usually classified under "obsolete notes" when looking through catalogs or dealer's fixed-price lists.