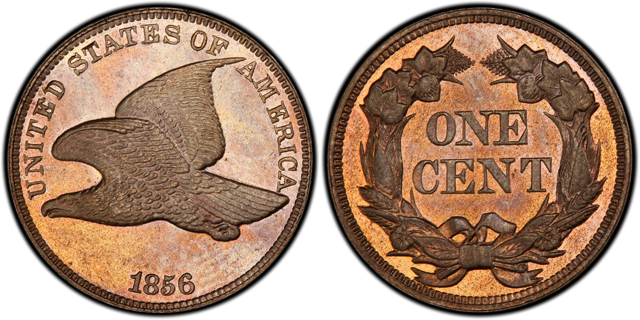 The Flying Eagle cent was produced for circulation only in 1857 and 1858.

The Flying Eagle cent is one of the shortest-lived series of United States coins, having been produced for circulation only in 1857 and 1858.

There is also the pattern produced in 1856, which also saw limited circulation.

The copper large cents and half cents had grown increasingly unpopular, forcing the Mint to research other compositional alternatives. Many banks and stores refused the coins as too ugly and too heavy. The coins were not legal tender then, although they are now.

Also, by the early 1850s, it was costing the Mint more to produce the copper cents than their face value. Something had to be done. Nearly 20 years earlier, eccentric New York City dentist Dr. Lewis Feuchtwanger unsuccessfully peddled to the U.S. Mint his alloy of "American silver" – copper, nickel, zinc, tin, antimony and other trace metals.

In 1850, the Mint was notified of a congressional proposal for ring-shaped cents of billon – 90 percent silver, 10 percent copper – but the annular cent proposition stalled. At the same time, nickel mine magnate Joseph Wharton pushed the use of his monopolized metal to solve the coinage crisis.

Mint technicians unsuccessfully conducted experiments using various combinations of copper and nickel, with and without being alloyed to additional metals.

In early 1856, Mint Director James Ross Snowden, one of Wharton's cronies, eventually settled on a new cent sized 32 percent smaller than the Coronet cent produced from 1816 to 1857. The small cent would be struck in an alloy of 88 percent copper and 12 percent nickel.

The nickel was added to produce a cleaner, more rugged coin that would withstand long circulation. The white metal was also added to increase the intrinsic value of the coin so it would be accepted by a skeptical public. The difficulty in obtaining the metal was also seen as a deterrent to counterfeiters.

For the obverse, Snowden approved the modification of Mint Engraver Christian Gobrecht's Flying Eagle motif, and for the reverse, Engraver James B. Longacre's wreath, originally used in 1854 for the $3 and $1 gold coins.

The 1856 pattern cents quickly became the prize possessions of hoarders.

For circulation, the new cents were struck in unprecedented quantities – 17.45 million business strikes dated 1857 and 24.6 million dated 1858 – in order to redeem the old copper cents as well as demonetized fractional foreign silver pieces.

The 1856 Flying Eagle cents are actually patterns, but a small quantity of non-Proof specimens were placed into circulation, possibly the following year. It is believed some 1,400 Proofs and restrikes were produced in all. Despite the extremely low mintage, it is considered common among patterns, since most patterns number 30 specimens or less.

Beware of 1856 alterations. On all genuine pieces, the upright of the 5 connects with the center of the knob, and, on the great majority of these, the e in one and cent on the reverse are closed by large connecting serifs.

The year 1858, with 24.6 million cents struck, also produced at least three major varieties. Collectors can look for the 1858 Large Letters variety, where the letters in the legends and mottoes are significantly larger and thicker than those on the 1858 Small Letters variety. There is also an overdate for the year, an 1858/7.

At first, the cents were well accepted, then blasphemed as a non-legal tender annoyance. The Flying Eagle cents designed by Mint Engravers Christian Gobrecht and James B. Longacre subsequently flew out of circulation as fast as they had flown in.