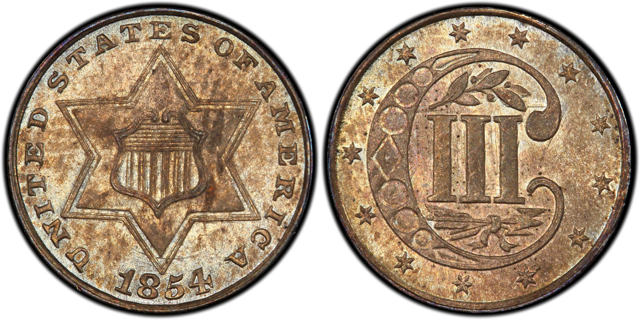 The three-cent piece ordered to be struck at the last session of Congress was ready for issue in June last. The number of such pieces coined by us during the remainder of the year was 5,447,400; at New Orleans the number was 720,000. This new coin is believed to find public favor; and I anticipate a considerable issue during the present year.

Eckert's prediction was on the money, so to speak, as the mintage of 18,663,500 silver 3-cent coins in 1852 was the largest of any of the 23 years of the series. Mintage was to decline steadily, dropping below the 1 million mark and then below 20,000 for most of the last nine years of issue.

As with other coins introduced after the death of Mint Engraver Christian Gobrecht in 1840, the designs ultimately selected for the silver 3-cent coin came from the imagination of Mint Engraver James B. Longacre. But before those designs could become reality, there was a brief artistic showdown with Chief Coiner Franklin Peale.

COIN VALUES: See how much U.S. silver 3-cent coins are worth today

Longacre reportedly had shown his trial pieces to Mint Director Robert M. Patterson and other Mint officials, who generally accepted the proposed design. But Peale wanted Longacre's designs abandoned. Peale wanted to use devices used by Christian Gobrecht when Gobrecht made pattern gold dollars in 1836.

Peale took it upon himself to do just that and produced a Liberty Cap design featuring a cap and rays with the date below on the obverse and the Roman numeral III on the reverse circled by a palm wreath, with UNITED STATES OF AMERICA inscribed around the border.

Longacre, apparently mindful of the artistic tug-of-war, wrote in a letter to Secretary of the Treasury Thomas Corwin to explain the devices he'd chosen for the coin.

"For the obverse I have therefore chosen a star (one of the heraldic elements of the National crest) bearing on its center the shield of the Union, surrounded by the legal inscription and date. For the reverse I have devised an ornamental C embracing in its center the Roman numeral III, the whole encircled by the thirteen stars – I think I have obtained the object of the law – but it would be very gratifying to me to have your candid opinion, provided your health should be such as to allow of your making a response to my communication in a private way – with very high respect and deep solicitude for your health – I remain etc.

"P.S. I should observe that the low relief of the coin is not to my taste if it could be avoided, but it is made necessary by the thinness of the piece, and the necessity of adapting the depth of the engraving to the powers of the press in striking it."

Ultimately, that lower relief was to win Longacre the nod of approval from Patterson because it would be easier to strike.

The design for the silver 3-cent coin was modified over the years. There are three obverse and two reverse design varieties.

Coins dated 1851 to 1853 were struck at the Philadelphia and New Orleans Mints in 75 percent silver and 25 percent copper. The design is Longacre's original.

A new design was mandated for coins dated 1854 to 1858 to correspond with the Act of March 3, 1853, which fixed the standard weight of silver at 90 percent silver and 10 percent copper. The coins, struck only at the Philadelphia Mint, also feature two extra outlines around the star on the obverse. These were known as "fish scales" because they were easily lost and became discolored and dirty.

The third design has two outlines around the star for coins dated 1859 through 1873.