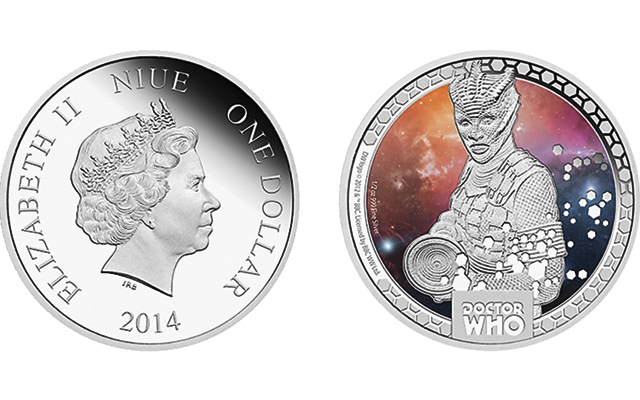 The newest Doctor Who coin from the New Zealand Mint and the Perth Mint celebrates the Silurians, an advanced race of reptilian humanoids. The half-ounce silver $1 coin is the fourth in a set of five from Niue.

Niue is far removed from the world inhabited by the science fiction television show Doctor Who, but a new Proof silver dollar coin unites the two universes.

The New Zealand Mint on May 6 issued the fourth coin in a series of five depicting the monsters that battle with Doctor Who. The coins are part of a large celebration of the show’s 50th anniversary. The show was produced by and aired on British Broadcasting Corp. from 1963 to 1989, before being brought back to the small screen in 2005.

The Silurians, an advanced race of reptilian humanoids, appear on this new coin.

Doctor Who is currently the longest running and most successful science fiction television series of all time. The program follows the adventures of the last of the Time Lords – the Doctor.

The Doctor has encountered three tribes of Silurians whose hibernation was disturbed by human activity. In the show, Silurians were the dominant life-form on Earth before the evolution of humanity. When a large object appeared in the sky, some of the Silurians retreated underground while the others escaped Earth in an ark. The object approaching Earth became the Moon. Humans and Silurians have had a number of encounters since.

The new coins contain a half-ounce of pure (.999 fine) silver and measure 32.6 millimeters in diameter. They were struck by the Perth Mint for the New Zealand Mint, which coordinated the licensing and the issuance of the coins.

All five of the coins have mintage limits of 5,000 pieces, and are being offered by the Perth Mint and the New Zealand Mint. In addition to the new coin, all previous releases remain available.

The New Zealand Mint offers the coins at $70 New Zealand, with a conversion to U.S. dollars made at the time of purchase (at publication time, $60.55 U.S.).

Shipping is an additional cost with either mint.