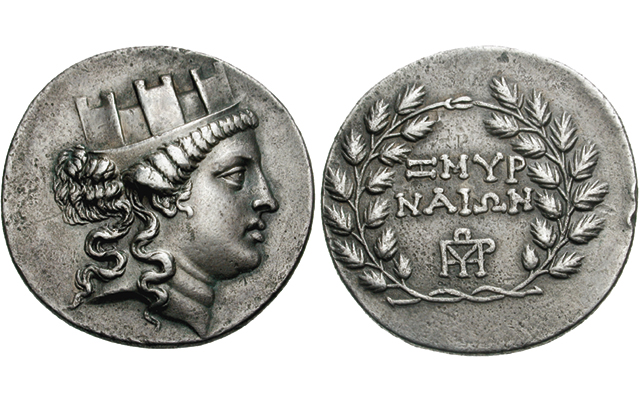 An elegant portrait of Tyche appears on this silver tetradrachm of the mid-second century B.C. from Smyrna in Ionia. A civic inscription appears in a wreath on the reverse. 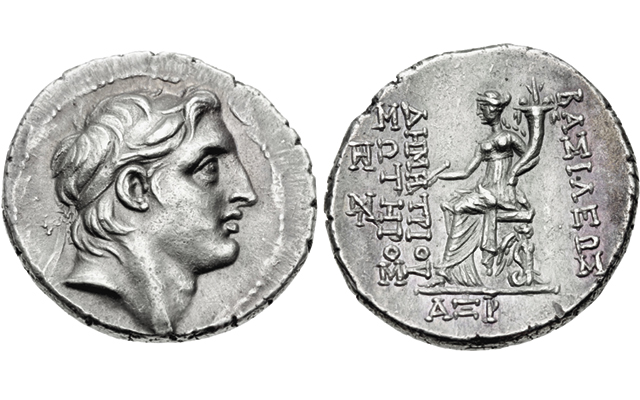 Tyche is enthroned, holding a cornucopia and scepter, on this silver tetradrachm of the Seleucid King Demetrius I (162 to 150 B.C.) struck at Antioch, Syria, in 152 to 151 B.C. 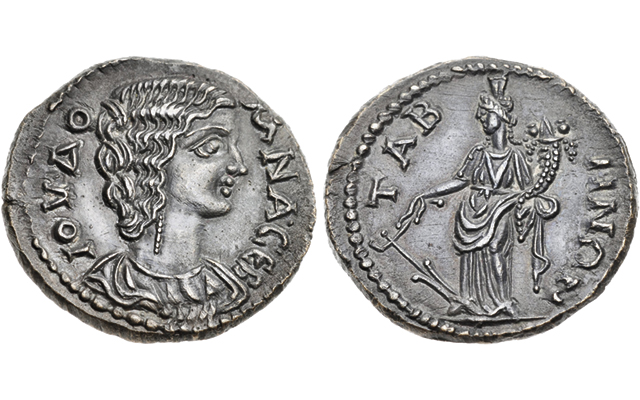 Tyche stands, holding a rudder and a cornucopia, on this 26-millimeter bronze of Tabae in Caria. The obverse bears a portrait of Julia Domna, Rome’s empress from A.D. 193 to 217. 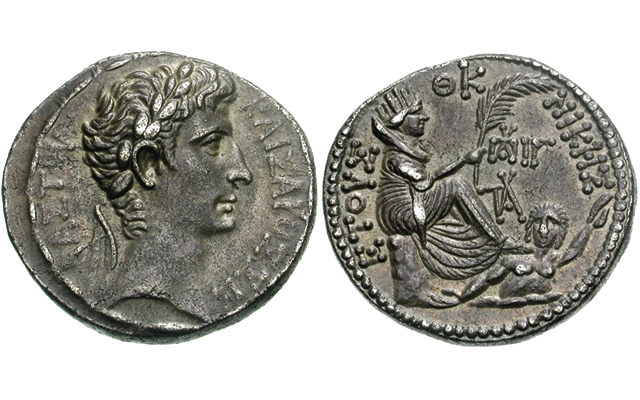 The river-god Orontes swims at the feet of the Tyche of Antioch, Syria, on this silver tetradrachm issued in 2 B.C. for Rome’s first emperor, Augustus (27 B.C. to A.D. 14). 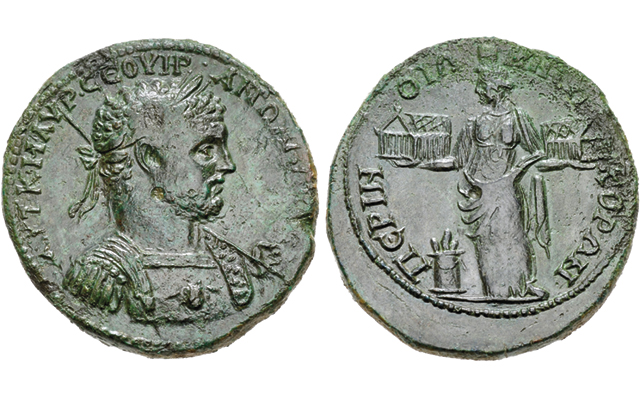 This bronze medallion of Perinthus, Thrace, from late in the reign of the Roman Emperor Caracalla (A.D. 198 to 217), shows Tyche at an altar, holding aloft two temples.

The popularity of Greek gods rose and fell with the passage of time. Some gradually lost their importance, whereas others became more relevant with the continuing evolution of Greek culture.

One divinity that was affected positively by the passage of time was Tyche, the goddess of chance, fortune, providence and fate who, after the conquests of the Macedonian King Alexander III “the Great” (336 to 323 B.C.), became more closely associated with the fates of cities.

As the protectress of cities, Tyche also symbolized their prosperity. She wears upon her head a mural crown, which is shown in the form of city walls with defensive towers, or as a cylindrical crown (a polos or a modius) that perhaps was adopted from the goddess Cybele, the mother-goddess who sometimes also assumed the role of city patron.

Tyche normally is shown cradling a cornucopia in her left arm and placing her right hand on the arm of a rudder that rests at her feet. The rudder symbolized her ability to guide the affairs of the earthly world, a concept reinforced when her rudder rests upon a globe. The cornucopia represented the abundance, fertility, and happiness that people hoped to derive from their worship of this goddess.

Her portrait appears on the obverse of a number of Greek silver coins, including the largest regular denomination, the tetradrachm. Some of the most artistic renderings occur on tetradrachms struck in the mid-second century B.C. at Smyrna in Ionia. In this case the wall and its turrets form an imposing “mural” crown that rests upon Tyche’s head.

Similarly bold portraits occur on tetradrachms of Aegeae in Cilicia, Laodicea-ad-Mare and Seleucia in Syria, and at Aradus and Sidon in Phoenicia; in all of these cases Tyche also wears a veil, which hangs from the bun of hair at the back of her head. A bold portrait of the goddess also occurs on tetradrachms of Laodicea-ad-Mare that on the obverse bear the portrait of the Roman Emperor Nero (A.D. 54 to 68).

On silver tetradrachms struck in 150 B.C. to commemorate the marriage of Cleopatra Thea, eldest daughter of the Egyptian King Ptolemy VI, to the Seleucid King Alexander I Balas, Cleopatra Thea is likened to Tyche. The portraits of these two rulers are shown jugate. Hers not only holds the position of honor but is adorned with the divine features of Tyche since she wears a polos and has a cornucopia at her shoulder.

A variety of coins show how far beyond the traditional borders of the Greco-Roman world the worship of Tyche had spread in ancient times. Perhaps the earliest example of this is a small issue of tetradrachms struck for a ruler named Andragoras, which shows on its obverse the turreted head of Tyche. The identity of this ruler is not certainly known, though two men named Andragoras are thought to have ruled Parthia (in north-eastern Iran) in the late fourth and mid-third centuries B.C.

Perhaps more significant is a series of billon tetradrachms struck by the rulers of the Parthian kingdom, which was established in the third century B.C. in modern Iran and surrounding regions, after the Greek influence that far east had diminished greatly.

On the earliest of these coins, struck by kings who ruled in the second to the first centuries B.C., the goddess is shown seated, holding a cornucopia and a small figure of Nike, the goddess of Victory, who crowns her. On other versions, introduced later, Tyche holds a cornucopia or a scepter, and is shown kneeling before an enthroned king (to whom she extends her arm) or standing before an enthroned king (to whom she presents a royal crown or a palm branch).

The portrait and standing figure of Tyche appear on countless silver and bronze coins issued throughout the Greek world. Her popularity continued well into the post-Greek world, when the Romans reigned supreme. Since the Romans were always eager to adopt Greek ways, they worshipped Tyche under the name Fortuna.

To many Romans, Fortuna was a fickle goddess who dealt out good and bad fortune without regard for the merits of people, cities or nations. However, in official art and propaganda she had a more beneficent appeal. She appears on Roman Imperial and provincial coins, proving that she was one of the most recognized divinities in the Roman world.

On Roman Imperial issues Fortuna made frequent appearances on coins of almost every denomination. She was familiar and important enough to be shown in a generic form, which sometimes included her being assimilated with Nemesis, the goddess of retribution, by the presence of a wheel at her feet. Often she is portrayed as Fortuna redux, the one who assured the emperor’s safe return from a journey.

On Roman coins struck for local circulation in the provinces, Tyche-Fortuna was widely adopted as the goddess of choice. Sometimes she appears on the obverse in place of the emperor, but typically she appears on the reverse, either alone, as a figure within a temple, or arrayed with other figures.

Tyche was especially worshipped at Antioch, Syria, where she had an important temple, the Tychaion. Many coins struck at this city by the Romans show the goddess seated on a rock, beneath which a personification of the local River Orontes swims. In this canonical image, she wears a mural crown and holds grain or a palm branch.

The bust of Tyche frequently appears on provincial coins of Mesopotamia, where the vulnerable cities of Carrhae, Edessa and Nisibis were routinely contested by the Romans and their Eastern enemies, the Parthians and the Sasanians. It is easy to see why these fortified military outposts honored the goddess responsible for their welfare and fates.

So commonly was her image used on Roman coins of the first through the third centuries A.D. that building a collection of those coins with Tyche would be both worthwhile and challenging.