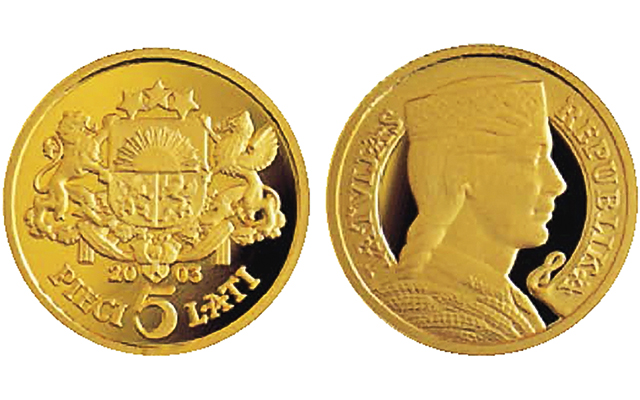 The Folk Maiden design was celebrated in 2003 on a small gold coin issued to mark the 10th anniversary of Latvia’s modern currency. The portrait is considered the reverse. 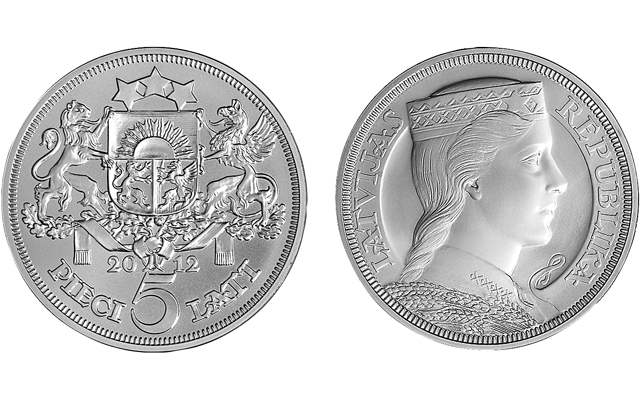 In 2012, the Bank of Latvia commissioned the Royal Mint to strike a Proof .925 fine silver 5-lats commemorative coin with the famous folk maiden motif. The Royal Mint had struck the original coins in 1929, 1931 and 1932. 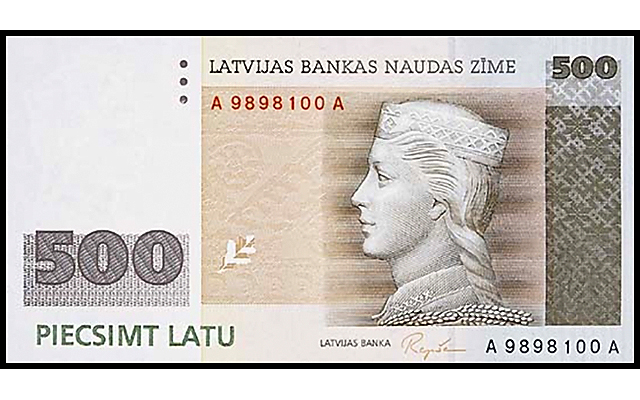 Before Latvia adopted the euro, the folk maiden appeared on the 500-lats bank notes issued after Latvia regained independence following Soviet control. She faces the opposite direction as usually seen on Latvian money.

Editor’s note: The following is the second of a three-part Coin World series by about Latvia’s folk maiden as she appears on coins prepared by Jeff Starck for the July 2014 monthly edition of Coin World.

The .9999 fine gold 5-lats coin was part of the international Small Gold Coins of the World program, sharing with collectors in other countries the design that was so inspirational to Latvians.

The 1.2442-gram coin measures 13.92 millimeters in diameter and was struck in 2003 by Valcambi SA, a private gold refiner in Switzerland. The plaster cast was modeled by Ligita Franckevica and shows the same basic design as the historic 5-lats coin (the date differs, for instance), but by the hand of Gunars Cilitis. As on the earlier coins, the portrait side is considered the reverse.

The coin commemorated the 10th anniversary of the return of the lats currency after the breakup of the Soviet Union.

In addition to the size and metal composition, the coin differs from the original 5-lats coin in that the edge of the gold coin is reeded.

The gold coin is infrequently encountered in the marketplace, and a current market value could not be determined. The value of the gold alone for the 25th-ounce coin is about $51 in U.S. funds at press time.

To mark the 90th anniversary of the Bank of Latvia, the bank issued a Proof .925 fine silver 5-lats coin using the original models produced in 1929.

The coin was struck by the Royal Mint, continuing the ties between the original coins and the modern era.

When the ceremonial first strike of the coin was held May 28, 2012, the Royal Mint Museum displayed the original drawing and plasters, the first time they had been on display.

Aside from the higher fineness, the 2012 silver coin has the same weight and size as the historic issue (25 grams, 37 millimeters in diameter).

The design is the same, except for the 2012 year date on the obverse.

The edge inscription translating to “God Save Latvia,” made a return appearance, separated by three hexagonal (six-pointed) stars.

The 2012 coin had a maximum mintage limit of 4,000 pieces. Current market value appears to have settled at around $150 U.S., based on recent online auction transactions.

The Folk Maiden design is so popular that it was used also for the circulating 500-lats bank note issued after Latvia regained independence following the fall of the Soviet Union. The design was in use through the end of 2013, at which time the euro was adopted.