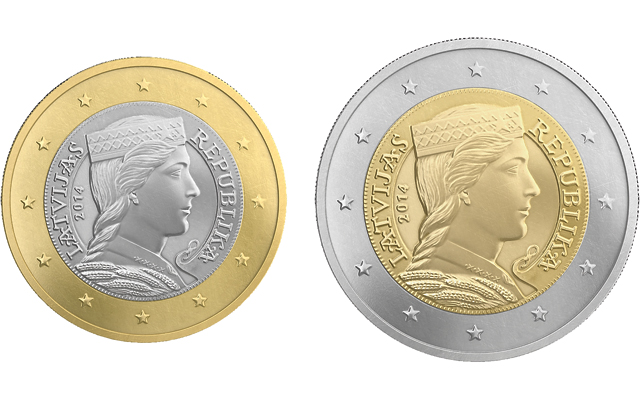 When Latvia adopted the euro at the beginning of 2014, the country said goodbye to the lats denomination but kept the nation’s famous symbol of freedom, using the Folk Maiden design for the 1-euro and 2-euro coins.

Editor’s note: The following is the final piece of a three-part Coin World series about Latvia’s folk maiden as she appears on coins, prepared by Jeff Starck for the July 2014 monthly edition of Coin World.

The 2014 1-euro and 2-euro coins of Latvia are affordable, readily available options for collectors seeking a coin showing the Folk Maiden design.

The start of the new year marked a new beginning for Latvia, as the nation became the 18th member of the eurozone Jan. 1.

Latvia’s adoption of the euro took place 10 years after Latvia joined the European Union amid the largest expansion of the body.

The coins were minted at the State Mints of Baden-Wuerttemberg, at the facilities in Stuttgart and Karlsruhe, Germany, beginning July 31, 2013.

In total, 30 million 1-euro coins and 20 million 2-euro coins were struck for the initial transition from the lat currency to the euro.

Though Latvia had to move away from its historic lat currency, the appearance of the folk maiden ties the modern, independent nation to the historic, familiar design.

The Folk Maiden design resoundingly won a national contest in 2004 to appear on the euro coins, based on results the Bank of Latvia announced in 2006.

Guntars Sietins designed the 1-euro and 2-euro coins based on Rihards Zarinš’ original design, and edge lettering on the 2-euro coin bears the inscription that translates to “God Bless Latvia.”

In 2012, academician Janis Stradinš, while a member of the Coin Design Committee of the Bank of Latvia, suggested that in 2022, to commemorate the centennial since the establishment of the national currency, the folk maiden image would likely be revived once again for a commemorative coin, continuing the tradition established in the design’s first 85 years.

The postscript for Zelma Brauere, the woman who inspired the folk maiden design does not end joyously, according to Stradinš.  (Designer Zarinš, the manager of the State Securities Printing House on Pushkin Street in Riga where Brauer worked, had been intrigued by the young woman's appearance and used her as the model for his Folk Maiden design.)

Brauere worked at the printing house for 43 years; she knew seven languages and was a careful and responsible worker under different political regimes, Stradinš said.

After retiring, she lived in a Riga suburb together with her sister, remaining single.

She generously presented the 5-lats silver coins to her loved ones but hated when people referred to the coin as a “Milda,” Stradinš said. When that happened, “she would go quiet in conversation or left the table.”

When she was 77 years old, Brauere was run over by a motorcycle in front of what was then the Teachers’ House and is now the Swedish Embassy in Riga.

Authorities refused to allow her to be buried at the Forest Cemetery, a national military cemetery in Riga, so the final resting place of this “gold standard of Latvian maidenhood” is Lacupe Cemetery. She was buried in her traditional costume as seen on the coin.

Today her memory lives on in the design she inspired and the coins that celebrate the freedom of the Latvian people.