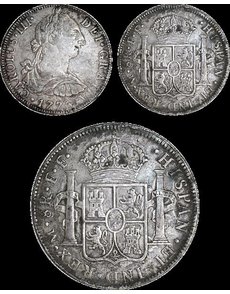 Counterfeiters are setting their sights on silver dollar sized coins, including producing a well-made fake shown above of a Mexico 1776-Mo FF 8-real coin — a piece for which the date, Mint mark and assayer initials combination does not exist.

The counterfeit shown here is one of the better made fakes ANACS has seen.

At first glance this fake looks like a typical corroded silver 8-real coin, dated 1776 and with the Mexico City Mint’s Mo Mint mark, plus the FF assayer’s initials.

Since many of these coins were either buried in the ground or recovered from shipwrecks, genuine coins with etched or corroded surfaces are commonly encountered.

What sets this fake apart is the fact that the date, Mint mark and assayer initials combination does not exist. When a counterfeiting operation produces large quantities of fake dies, eventually they will match up an obverse and a reverse that do not belong together.

Other examples of die mismatches that we have encountered are an 1879-S Trade dollar and an 1894-CC Morgan dollar.

When you take a closer look at this fake 8-real coin, other counterfeit diagnostics begin to show up.

The finer details are a bit more ragged than they should be, and the fields exhibit microscopic raised lumps and lines.

On the other hand, the corrosion around the lettering and the rims has a very authentic appearance.

We are not sure what techniques are being used to apply artificial corrosion to the surfaces of fakes of silver coins, but if it makes them more difficult to detect, they will become more popular.

The counterfeit 8-real coin is not the first fake Spanish colonial coin ANACS has examined. As reported in this column in the Feb. 1, 2010, issue of Coin World, ANACS has also examined a counterfeit 4-real coin. That 1761 4-real counterfeit coin was not one of the better examples ANACS has seen over the past year, but it could easily fool collectors who are not familiar with this type of coin.

Diagnostics for this 4-real counterfeit include ragged devices and fields plus a rather crude edge design that appears to have been hand cut.

Experience with the appearance of genuine Spanish colonial pieces is the best way to avoid counterfeits of these pieces. Many of these fakes are sold via online auctions, so avoid these unless you are comfortable with your authentication expertise.