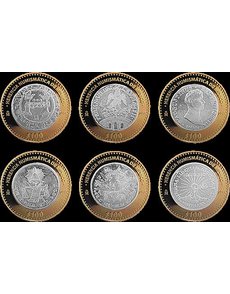 The Banco de Mexico on Nov. 26 released the third set of six 2013 100-peso coins in a four-part, 24-coin series celebrating the Numismatic Heritage of Mexico.

The commemorative designs appear on the reverses of the ringed-bimetallic coins and depict a replica of the obverse of the coin being commemorated.

The coins share a common obverse showing the national coat of arms and a legend translating to “United States of Mexico.”

One of the coins honored in the third launch is the circa 1536 silver 3-real piece of Carlos and Johanna during the colonial period, early in the Mexico City Mint’s history.

Another honoree is an 1811 silver 8-real coin of the Supreme National Congress of America, an insurgent group during the Mexican war for Independence.

The original coin was issued in Zitacuaro, Michoacán, by a junta.

The war led to the creation of the first empire, and Emperor Augustin Iturbide’s first coin — an 1822 gold 8-escudo piece — is honored on another coin in this launch.

In 1870 the nation’s first decimal coins were issued. These coins show a sword (representing the executive branch), an open scroll (law) and a balance (justice) below a liberty cap against the sun’s rays. An 1870 Balance Scale silver peso from Zacatecas appears on one of the new 100-peso coins.

The Cap and Rays motif debuted in 1823. The Cap and Rays silver 8-real coins are among the most prolifically produced and widely circulated silver crowns in history. They even circulated in China, where they were marked with chops to attest their value. A “chopmarked” example appears on a new 100-peso coin.

Another coin in the third series honors a silver 2-peso coin of Emilioano Zapata issued during the Mexican Revolution. The originals were struck in Suriana with reduced silver content, a symbol of the wavering fortunes of the fighters.

The Prooflike 100-peso coins have a .925 fine silver center weighing 16.812 grams surrounded by a bronze-aluminum-nickel ring weighing 17.155 grams; the total weight of each coin is 33.967 grams. The coins measure 39 millimeters in diameter and have a mintage limit of 8,000 pieces per design.

Distributor Pat Stovall offers the new coins for $212 per set plus $7 shipping and handling per order.