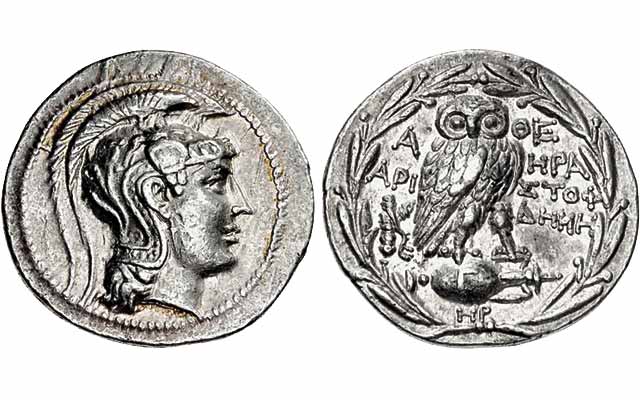 “Wreath bearer” coinage was popularized by Athens, where this silver stephanophorus was struck circa 136 to 135 B.C. It is part of a series that endured perhaps 120 years. 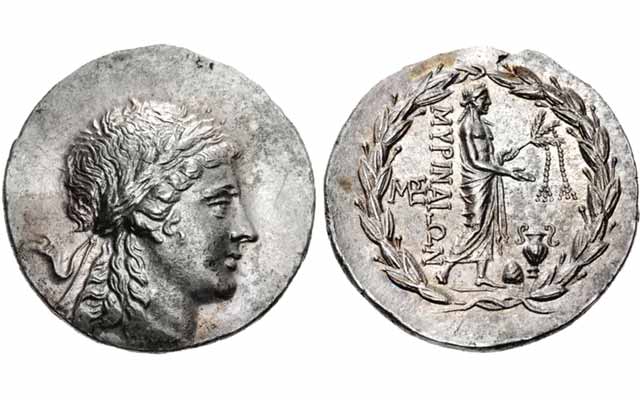 Apollo graces both the obverse and the reverse of this silver stephanophorus, struck during the mid-second century B.C. at the city of Myrina in Aeolis. 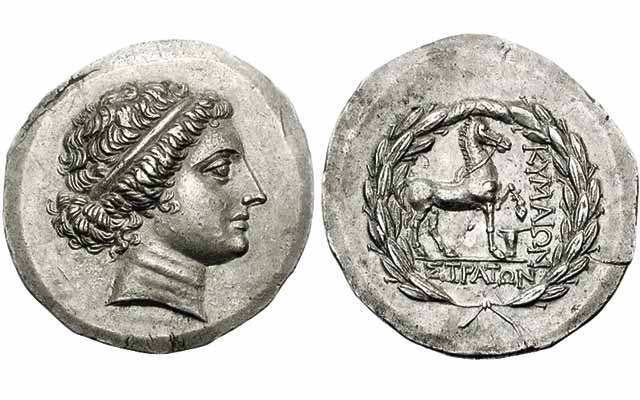 This silver stephanophorus of the mid-second century B.C. from Cyme in Aeolis shows the head of the local Amazon and, within a wreath, a horse standing with a foreleg raised over a cup. 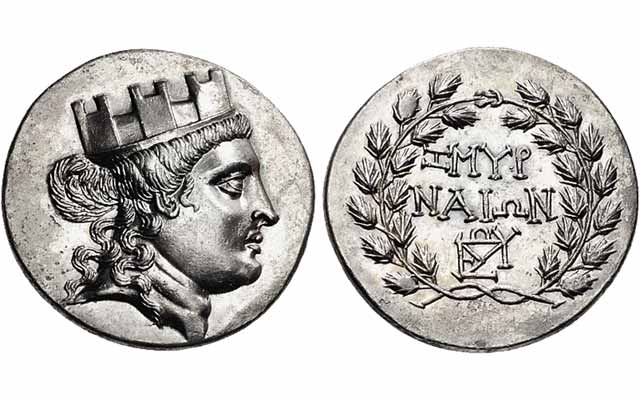 Smyrna issued this silver stephanophorus in the mid-second century B.C. It portrays the goddess Tyche and encloses the name of the issuing authority in a laurel wreath. 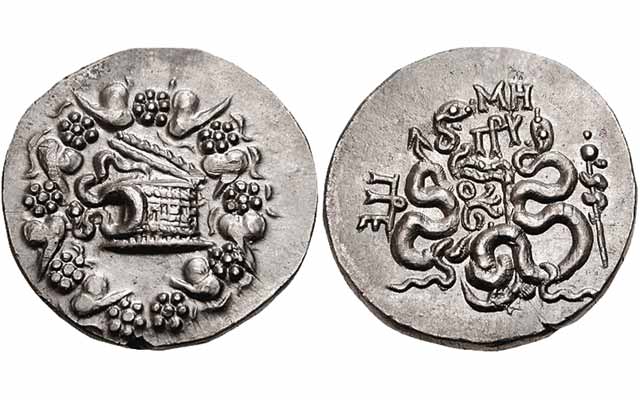 The decision to use a wreath on the obverse of this silver cistophorus of Pergamum, struck circa 85 to 76 B.C., presumably was influenced by earlier stephanophoroi.

Among the most impressive ancient Greek coins are silver tetradrachms struck by independent cities in the second century B.C., many of which feature reverse designs enclosed within a wreath.

They were familiar enough in their day to earn the nickname stephanophorus (or stephenophorus), meaning “wreath bearer.”

It is thought that sometime in the 180s or 160s B.C. Athens introduced its “new style” tetradrachms, on which an enclosing laurel wreath became an integral part of the reverse design. Prior to this, very few ancient coin designs were presented within a wreath. Notable exceptions include issues from Gela in Sicily, Rhegium in southern Italy, and Sicyon and Olympia in the Greek Peloponnese.

In many aspects of life — especially art, politics and economics — Athens was a trend-setter in the Greek world. Not surprisingly, its stephanophorus coinage was seen as a model by other coin issuers, especially the Greek cities along or near the Aegean shore of Asia Minor, being the western shore of modern Turkey.

The “new style” coinage of Athens was copied in other regards, also, for these coins had a radically different appearance than earlier Greek coins. Instead of thick, compact planchets, the new issues were struck on planchets that were comparatively broad and thin.

This idea of a broad, thin planchet was widely adopted by coin issuers throughout the Greek world. This new feature gave the impression of the coins being more substantial than their predecessors, even though their weight was the same or sometimes lower. One consequence of this evolution was that the dies of Athens’ stephanophoroi were cut in much lower relief than had been the case with the city’s earlier coinage.

The “new style” of Athenian coins showed on their obverse the helmeted head of Athena and on their reverse a standing owl. Though this basic design formula had been used at Athens for the previous 350 years (or more), the difference in style and appearance is astonishing.

Athena’s helmet now has three crests rather than one, and the bowl of her helmet often is highly decorated with a floral pattern, a bounding Pegasus, and the four horses of a chariot. On the reverse, Athena’s owl now perches on an overturned amphora (a two-handled transport jug).

Also, the fields around the owl are crowded with inscriptions and symbols. These names, letters, monograms and symbols identify Athens as the issuer, record the names of magistrates, and bear control features that often allow the date of a coin to be narrowed down to the month. Even though the owl and its accompanying elements present an incredibly busy design, all are still enclosed within a laurel wreath.

Two cities in Ionia, Lebedus and Heraclea, copied the issues of Athens closely, for they chose as their obverse deign a helmeted head of Athena that was quite similar to the one shown on the stephanophoroi of Athens. The reverse designs of their coins, however, reflect a greater degree of independent thinking. Heraclea portrayed the club of Heracles within an oak wreath, and Lebedus — which did not stray quite as far — showed an owl standing between crossed cornucopias, all within a laurel wreath.

The Ionian city of Smyrna struck a couple of large issues of stephanophoroi. The obverse of its coins show the head of Tyche, the protectress of cities, wearing a crown that mimics a turreted city wall. The reverse is not very imaginative, but betrays a strong sense of civic pride, for it shows an oak wreath containing the city’s name either as the principal design element or as an accompaniment to a prowling lion.

After Athens, however, the two cities that issued the largest quantities of stephanophoroi were Cyme and Myrina, both located in the region of Aeolis in Asia Minor. Each chose designs of local significance, with the ones that appear on the reverse being enclosed within a laurel wreath, just as at Athens.

The issues of Cyme bear on their obverse the head of the local Amazon, and on the reverse a horse standing with one hoof raised above a drinking cup.

Those of Myrina show on their obverse the head of the god Apollo, and on their reverse the standing figure of Apollo, who holds a filleted laurel branch and a phiale (a libation dish). At the god’s feet are an amphora and the omphalus stone — an emblem that symbolized this god’s gift of prophecy.

The influence of the Athenian wreath also reached those who ruled the Greek kingdoms and political leagues of the second and first centuries B.C. For example, the Greeks in the Peloponnese who oversaw the coinage of the Achaean League decided to place the league monograms, mint symbols, and control symbols within a laurel wreath on the reverse of its principal silver coinage.

Greek kings were equally influenced by the Athenian design innovation. Many rulers of the Seleucid Kingdom presented their reverse designs within wreaths, as did the famous Armenian King Tigranes II (95 to 56 B.C.). The Macedonian Kings Philip V (221 to 179 B.C.) and Perseus (179 to 168 B.C.) also enclosed their reverse designs within an oak wreath, establishing a tradition that continued in Macedon even long after that region had fallen under Roman control.

The most enduring legacy of the “wreath bearers,” however, is found in the Kingdom of Pergamum, situated in the heart of Asia Minor.

During the second and first centuries B.C. those who ruled this kingdom struck enormous quantities of coins that came to be known as cistophori after the cista (basket) on its obverse, which just happened to be enclosed in an elaborate ivy wreath.