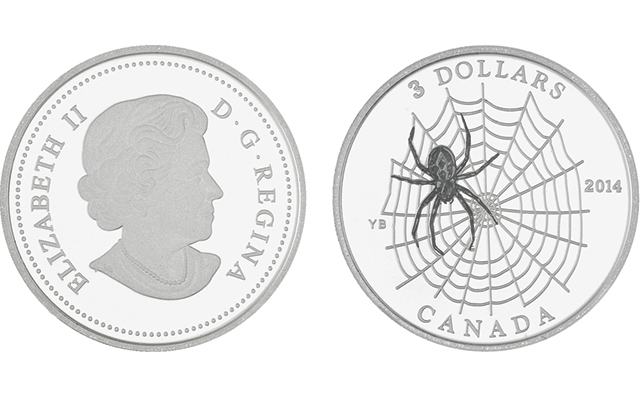 From Canada’s “Animal Architects” series, this 2014 $3 coin shows the large orb weaver spider, large and scary-looking but a helpful and harmless spider. 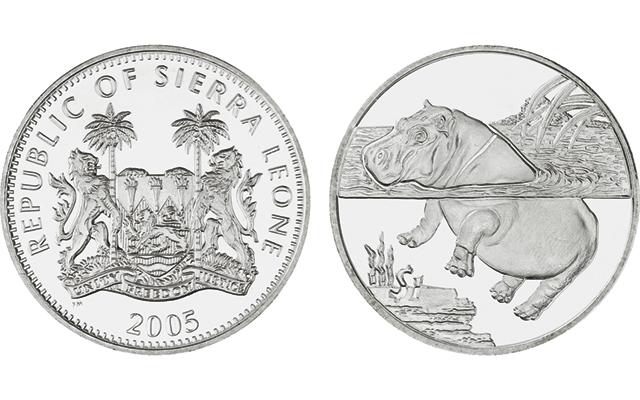 This Prooflike dollar coin is from a 2005 Sierra Leone native animals series. Cuddly-looking hippos are considered one of the most dangerous animals in Africa, attacking and killing people on land and in boats without provocation. 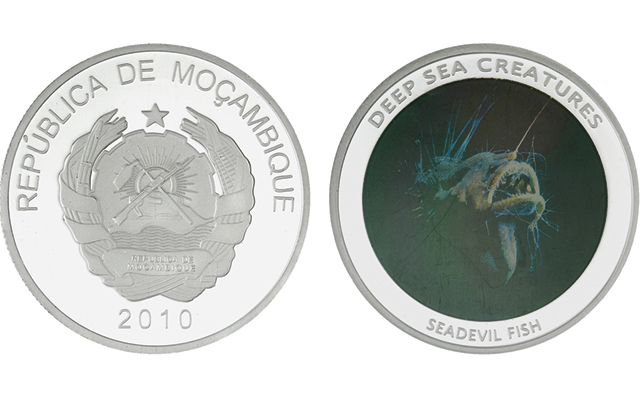 This 2012 medal is part of the Mozambique “Deep Sea Creatures” series of monstrous-looking (including some monstrously named) animals that include the seadevil, vampire squid, fangtooth fish, and viper fish, to name a few. 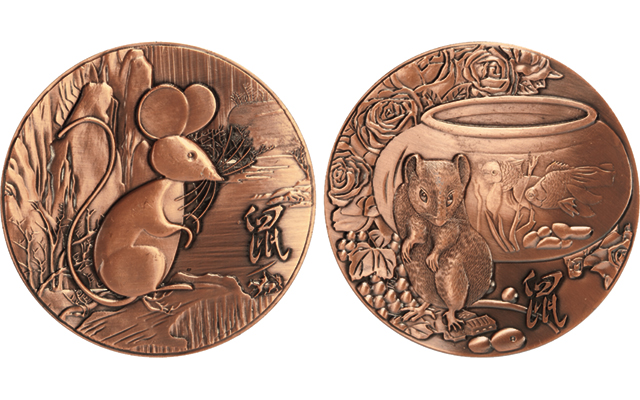 This 2008 Chinese “Year of the Rat” high relief medal is part of a series representing the cycle known as the Chinese Zodiac. Next to the mosquito, no other common small animal has caused more human death and misery than the rat. 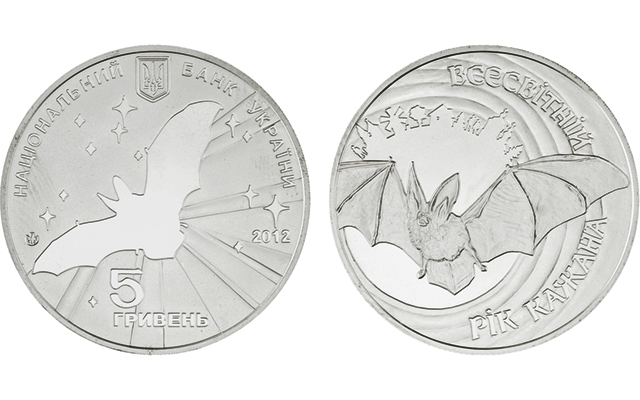 If Halloween has an official animal monster, it is the bat, a very misunderstood monster that is critical to environmental health. This 2012 Ukraine 5-hryvnia coin shows a detailed bat on one side and the bat in silhouette on the other. 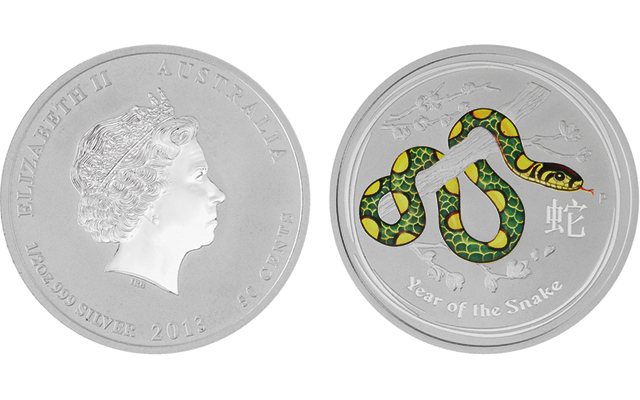 Year of the Snake coins are popular, but no Australian snake has the pattern of colorization seen on this 2013 50-cent coin from the Perth Mint. 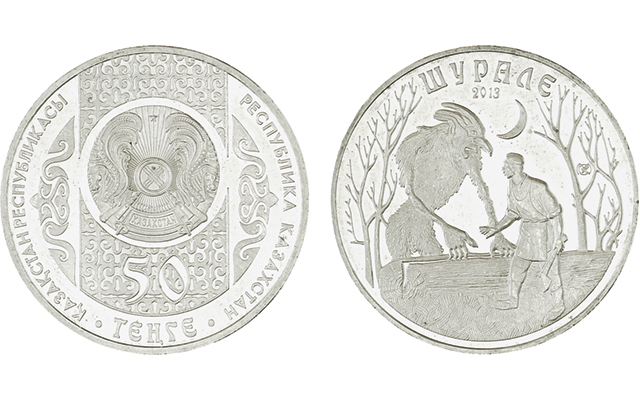 This legendary monster, Shurale, is said to kill those lost in the forest by tickling them to death. Kazakhstan children grow up determined never to be lost in any forest.

Monsters are front and center during the Halloween season.

According to the dictionary, a monster can be real or imagined, grotesque or simply large, and dangerous or just strange. They evoke emotions ranging from trepidation to terror.

Many creatures considered monstrous are not nearly as deadly as their reputations make them out to be. Conversely, some have unreservedly cuddly reputations. World coins showcase them all.

In Kazakhstan and parts of Russia, children are fascinated and terrified by a mythological monster named Shurale. If you get lost in the woods, this woolly, horned, shape-shifting creature who wears his shoes backward may grab you and tickle you to death with his long bony fingers.

In 2013, Kazakhstan featured Shurale on a 50-tenge coin, undoubtedly so that children could see what he looks like, and better avoid him. After all, to die laughing is still to die.

Living in the cold, dark, high pressure water of the deepest parts of the ocean makes for creatures that look monstrous. Mozambique recently celebrated the scariest-looking denizens of the deep in a 2010 “Deep Sea Creatures” silver-plated medal series.

Some have names that sound as frightening as the fish look — others, not so much. The series includes the seadevil, vampire squid, football fish, fangtooth fish, dragonfish, viper fish, gulper eel, angler fish, giant squid, and the giant isopod.

Ophidiophobia, the extreme fear of snakes, is often listed as the most common phobia, with up to one-third of all humans being affected by it. Happily, most snakes are not venomous, and as a group, they do vital work by eating rodents and pests.

In 2013, Australia issued a silver 50-cent mint-colorized bullion coin for the Year of the Snake. The snake on the coin is not a venomous species. In fact, it is not a real species at all.

The color yellow was included on the pattern on the snake’s body because yellow symbolizes happiness and prosperity in Asia. The Perth Mint also minted a gilded variety, as gold symbolizes wealth and happiness.

Arachnophobia is another fear often seen on the “top 10” phobia list.

The large, monstrous-looking orb weaver spider featured on the mint-colorized Canadian 2014 $3 coin is actually a helpful creature, harmless to people. Their large webs, spun every evening and taken down each morning, catch nighttime insects like mosquitoes. If an orb weaver sees you approaching, it will shake its web to warn you so that you don’t run into and ruin the web.

Like snakes and spiders, bats tend to look frightening, but any danger they pose to humans is for the most part exaggerated. Studies show that where mosquitoes are common, bats are happy to consume them. Because of the diseases their bites transmit, mosquitoes are responsible for more human deaths than any other creature. This makes them the true monster, and the bat, a prime monster-killer.

Poland, Samoa, New Zealand and Canada have issued bat coins. In 2012, Ukraine joined this club with a 5-hryvnia double-bat coin. On one side is a detailed rendering, and on the other, a bat silhouette. All 26 Ukrainian bat species are protected.

A check of children’s books about animals might lead you to believe that the hippopotamus is a gentle vegetarian. In reality, they are very aggressive toward people and use their razor-sharp teeth to kill humans on land and in the water. Since hippos emerge from rivers in the evening to graze, they are a threat to anyone nearby, with dominant bulls and new mothers being the most aggressive.

The 2005 Sierra Leone dollar depicts a half-submerged hippo but with a clear overview of the entire animal.

An even more monstrous grass-eater is a grazer that goes by the nicknames, “Black Death” and “Widowmaker.”

The African or Cape buffalo is not related to water buffalo, bison, or cattle. It has never been domesticated, owing to an unpredictable and aggressive nature around people. Human and animal hunters are very cautious about taking down this animal; even lions and crocodiles hesitate.

The 2014 Zambia 1,000-kwacha coin gives a realistic portrait of this animal.

Another monster that comes in a relatively small package is the rat. Next to the mosquito, no other common small animal has caused more human death and misery than the rat.

And yet, fans of the domesticated rat claim that they make wonderful pets. The “Year of the Rat” is one of 12 in the repeating cycle known as the Chinese Zodiac. In 2008, China issued a large bronze 90-millimeter diameter Rat medal in high relief.