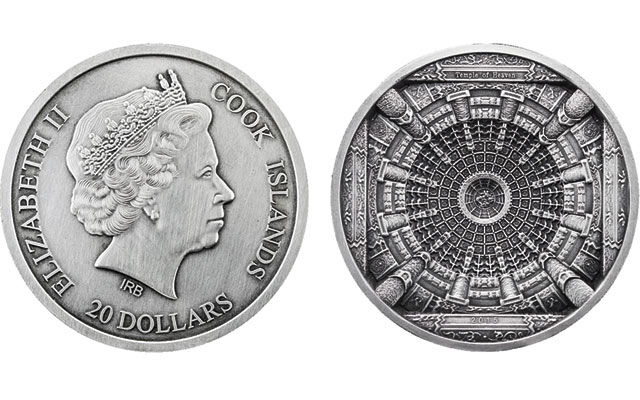 A 2015 silver $20 coin from Cook Islands is struck using what issuer MDM calls "four-layer" minting to provide a three-dimensional look to the reverse. The coin highlights the ceiling of the Temple of Heaven in China. 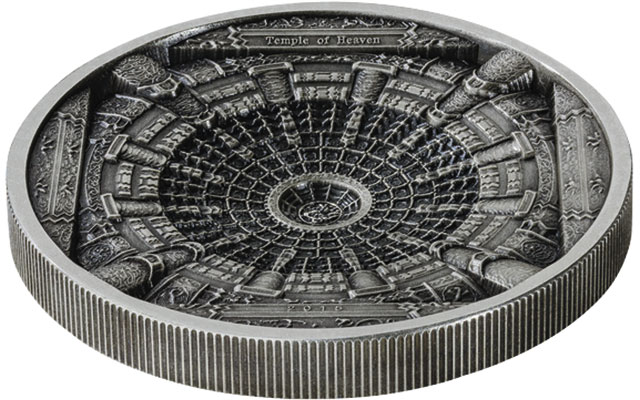 A side view of the 2015 Cook Islands silver $20 coin highlights the various depths on the design details, which at their lowest point is 5 millimeters below the coin's surface. 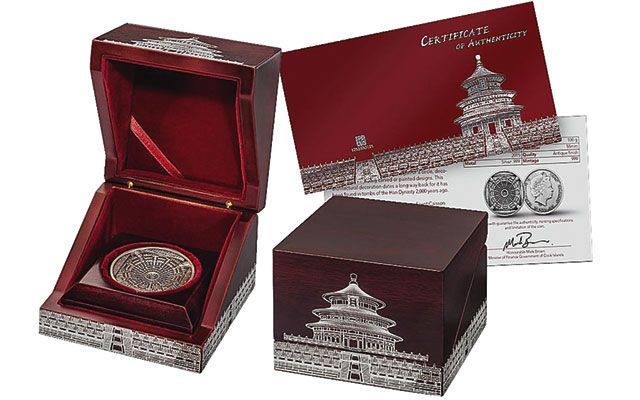 Packaging for the Temple of Heaven coin is elaborate and meant to complement the special features of the coin.

The race to offer new minting technology continues with a new coin struck in the name of the Cook Islands, the first coin in a new "four layer" series.

The Antique Finish 2015 Temple of Heaven .999 fine silver $20 coin has a concave, recessed reverse struck using “four-layer” minting technology, according to First Coin Company, a distributor for the coin in the United States. The coin program is being led by MDM, a wholesaler and retailer based in Germany.

The 100-gram coin features a detailed three-dimensional effect based on the four layers of the design, according to the company. The deepest part of the design measures 5 millimeters in depth.

The reverse of the coin depicts one of the caisson ceilings of the Temple of Heaven in Beijing, China.

Built in 1406 by Emperor Yongle, the Temple of Heaven is a masterpiece of Chinese architecture and was named a UNESCO World Heritage Site in 1998.

The Temple's Hall of Prayer is where the emperor prayed for good harvests.

The coin weighs 100 grams, measures 55 millimeters in diameter and has a mintage limit of 999 pieces.

It comes packaged in a wooden box with display and silver print and serialized certificate of authenticity.

The coin will become available in May, although First Coin Company is now accepting pre-orders for $299.90.

To order the coin, visit the First Coin Company website.