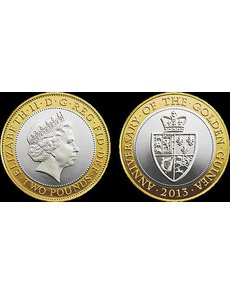 The famous “Spade guinea” design from 1787 to 1799 is celebrated on the 2013 commemorative coins marking the denomination’s 350th anniversary. The Proof .925 fine silver version appears here. 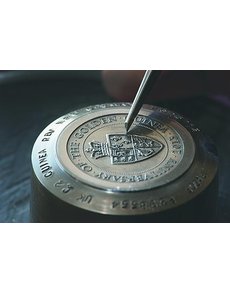 A worker at the Royal Mint performs tooling work on the master punch or working punch used to create dies to strike the 2013 £2 Guinea collector coins.

Britain’s Royal Mint is marking the 350th anniversary of the first striking of the guinea coin with a £2 coin.

Individual precious metal versions are now available, following the release in January of base metal Uncirculated and Proof and silver Proof examples, released as part of the Royal Mint’s annual sets.

Silver Proof, silver Proof piedfort (double-thick) and Proof gold versions of the £2 coin are now offered, with delivery due in July.

The guinea was the principal British gold coin issued from 1663 until 1813. Originally struck as a 20-shilling coin, the guinea’s value in silver fluctuated with the price of gold, reaching some 30 shillings by the reign of William and Mary at the end of the 17th century. In 1717 Master of the Mint Sir Isaac Newton, set the guinea’s worth at 21 shillings — or one pound and one shilling.

The coin’s name comes from the Guinea Coast of Africa, where the royally chartered Africa Company mined some of the metal used to strike the coins.

The 2013 £2 coins’ reverse, designed by Anthony Smith, was inspired by the heraldic shield of the Royal Arms used on the “spade guinea” of George III, issued from 1787 to 1799. The shape of the shield resembles that of a garden spade.

While the circulating £2 coin is ringed-bimetallic, the standard and piedfort Proof .925 fine silver versions have gold-plating meant to replicate the look of the original guinea. The Proof gold coin has an outer ring of .9167 fine red gold surrounding a core of .9167 fine yellow gold.

All the 2013 guinea coins measure 28.4 millimeters in diameter.

Both silver versions have a mintage limit of 4,013 pieces, with 2,000 of each available individually. The standard silver coin is priced at £50 and the piedfort version costs £100.