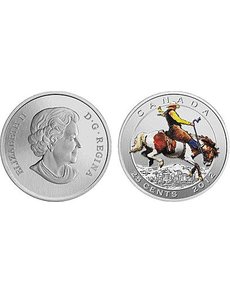 The Royal Canadian Mint marks the centennial of the Calgary Stampede with three collector coins, including this colorful, oversized Specimen finish 25-cent coin. 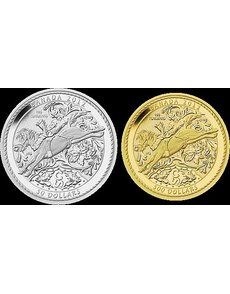 A famed bucking bronc known as Grated Coconut appears on the reverse of two 5-ounce coins, a Proof .9999 fine silver $50 coin and a Specimen .9999 fine gold $500 coin. The design was created by Michelle Grant, who has designed several Canadian coins with a western, rodeo theme.

What is billed as “The Greatest Outdoor Show on Earth” is being honored on commemorative coins in Canada.

The Royal Canadian Mint is marking the centennial of the Calgary Stampede, a large 10-day rodeo and music festival in the capital of Alberta, with three new collector coins, released May 28.

The centennial event is scheduled from July 6 to 15, and is expected to draw more than 1 million attendees from Canada and around the world.

The founding of the Calgary Stampede is credited to American Guy Weadick, a former trick performer in a “Wild West” show who in 1912 convinced investors to stage an authentic display of ranching and farming skills and pursuits.

The event was rooted in an 1886 exhibition conducted by the Calgary and District Agricultural Society that was reprised several times before Calgary hosted the Dominion Exhibition in 1910. With the event a success, Weadick gained backing to launch the Stampede in 1912, but it was only held a few times before 1923, when it became an annual event.

The event grew along with the city (which experienced growth thanks to oil discoveries). Today, the Calgary Stampede includes a parade, rodeo, rangeland derby, chuckwagon races, nightly entertainment, agricultural exhibits and more.

The RCM is issuing a colorful, oversized 25-cent coin and two 5-ounce Proof coins (one silver, one gold) to honor the centennial.

The Susanna Blunt effigy of Queen Elizabeth II appears on the obverse of all three coins. The reverses of the three coins depict two different designs, with the two precious metals pieces sharing a common design.

The Specimen finish copper-nickel 25-cent coin highlights the saddle bronc riding event, with a Tony Bianco design of a “fearless saddle bronc rider and his high-spirited bucking bronco” seeming to soar above the city of Calgary at the foothills of the Rockies near the Broad Bow River, according to the RCM.

The coin is offered only as part of a coin and stamp set that includes a souvenir sheet with a permanent domestic rate stamp showing a horse and western riding gear, and a $1.05 stamp (used for letters mailed to the United States).

As reported by Denise McCarty in Linn’s Stamp News (May 14 issue), according to Canada Post, when using the augmented reality feature, “the horse will appear lifelike on one stamp, while on the other you can compete in a virtual barrel racing rodeo event.”

The coin and stamp set are available “while supplies last” and have a retail price of $25.95 Canadian.

The Calgary Stampede and the province’s agricultural heritage are familiar themes on Canadian commemorative coins.

In 1975 a silver dollar marking the centennial of Alberta displays a cowboy atop a bucking bronco, with the Calgary skyline and an oil well in the background.

In 2002, a 50-cent coin (designed by Grant) honoring the Calgary Stampede was part of a three-year series honoring Canadian festivals; the coin, which coincided with the 90th anniversary of the event, shows the Calgary Saddledome, as well as a rider on a bucking bronco, with a chuckwagon racing in the scene behind it.

In 2006, Grant also designed the reverse of the Cowboy 50-cent coin. The twenty-fifth-ounce .9999 fine gold coin depicts a contemporary saddle horse with a rider, with a maple leaf underneath the pair.

Three United States distributors for the RCM carry the 2012 coins at fixed prices in U.S. dollars.