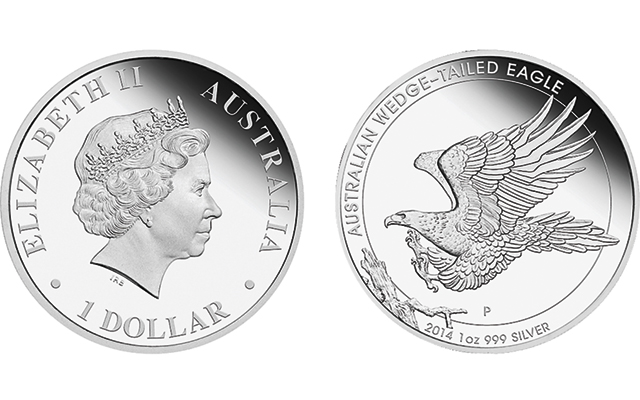 The Perth Mint on May 6 (May 5 in the United States) released a Proof 1-ounce, .999 fine silver $1 coin for sale outside of the United States. The coin follows the successful Jan. 7 launch of a high relief version that sold out its 10,000-coin mintage. 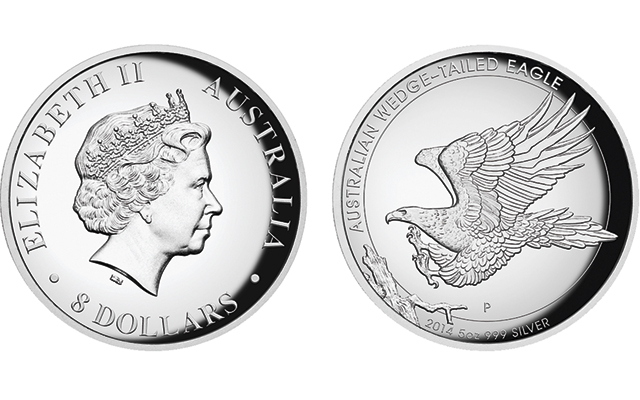 These two new coins follow the successful release in January of two high relief Proof versions bearing the same Mercanti design, a 1-ounce .999 fine silver dollar and a 1-ounce .999 fine gold $100 coin, both of which quickly sold out after their Jan. 7 launch.

The newer coins were officially launched at midnight May 6 in Western Australia (where the Perth Mint is located) for distribution in Australia and the world outside the United States. However, U.S. distributor GovMint.com has been exclusively offering them in the United States for several months.

All of the coins carry Mercanti’s design of an eagle in mid-flight as it prepares to land on a tree branch. Mercanti’s initials are hidden in the branch.

The May 6 launch (at noon Eastern Daylight Time May 5 in the United States) makes the coins available to the rest of the world market. Both new coins have a mintage limit of 5,000 pieces, and are expected to sell out, especially given the strong demand in the market for all four coins already.

Encapsulated, graded versions of the new 5-ounce $8 coin are selling in the secondary market for around $500, depending on grade, grading firm, and sale date. GovMint.com only sells the coins already graded; an official issue price was unavailable (and GovMint.com has apparently sold out its supply of the coin). Secondary market prices for the standard Proof silver dollar have settled around $100 to $150, after being around $200 for March and part of April (the GovMint.com website currently offers the Proof example at $99).

The high relief silver version had a mintage limit of 10,000 pieces. Examples of the coin, whether in original packaging or graded and encapsulated as Proof 69, are trading in the $200 to $250 range, with Proof 70 examples (with or without qualifiers) bringing nearly double that.

There are far fewer sales of the high relief gold $100 coin to acquire (after all, it only had a mintage limit of 1,000 pieces). All of the four examples that have sold through the site -- three designated with various Proof 70 grades and one in original mint packaging – realized anywhere from $3,500 to $4,000.

Collectors in the United States must order the Wedge-Tailed Eagle coins through GovMint.com, and its pricing is unavailable (the coins are not yet listed at the company’s website).