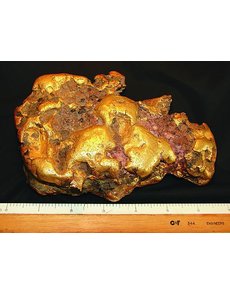 This nearly 100-ounce gold nugget realized $460,000 at a March 16 auction in Sacramento, Calif. In pre-auction publicity, the nugget was said to have been possibly the sole remaining authenticated massive gold nugget from the original California Gold Rush region. A prospector in Australia, however, claims he found the nugget in that country in 1987.

The nugget was sold for $460,000 in Sacramento, Calif., at a March 15 auction by Fred Holabird of Holabird-Kagin Americana. The nugget was purchased for a client by Spectrum Group International in Irvine, Calif.

On June 4, Australian prospector Murray Cox of Geelong, Victoria, Australia, claimed in an interview broadcast on the Sacramento ABC television affiliate News10, that he and a friend, Reg Wilson, unearthed the nugget in 1987 in a farm field near Ballarat, north of Melbourne.

Cox said Wilson sold the nugget in 1989 to an Arizona gold dealer by the name of “Rattlesnake” John for $50,000 Australian. Cox contacted the television station after seeing a story about the nugget in an Australian mining magazine.

Cox provided the television station with a clipping from a 1987 article featuring a photograph of Cox and Wilson holding the nugget after unearthing it.

In the article, which was published in the Melbourne Sun newspaper, Cox and Wilson said they named the nugget the “Orange Roughie” because of its fish-like shape.

Holabird said the California property owner, whom he did not identify but who was identified in the News10 broadcast as James S. Grill, consigned the nugget to the auction.

The property owner claimed he found the nugget in 2010 while metal detecting on his property in Nevada County near Washington, Calif., thus its nickname the “Washington nugget.”

Holabird said the claim the nugget was found in California was “very credible based on geology and historical record.”

“For 150 years Mother Nature has told us these nuggets are from California. But sometimes Mother Nature does funny things. [It seems] she decided ‘I can do it [place nuggets with similar characteristics] in two places’,” Holabird said. “For years we thought California redwoods were unique to the west, but they’ve found redwoods in China. Natural science is not an exact science. We will continue to learn.”

To clear up the dispute, Holabird has proposed scientific testing of the nugget to “separate the innuendos, egos, and rumors from the piece and let science do the talking.”

To that end Holabird has proposed to the current owner of the nugget that gold experts Dr. Robert Cook, retired head of the geology department of Auburn University in Alabama, and Dr. John Watling, a forensic and chemical analyst at the University of Western Australia in Perth, do the scientific testing needed to determine the true origin of the nugget.

Holabird estimated the cost of the testing at $15,000. As for as when or if the testing will begin, he said “all parties have been contacted and the resolution is in the hands of others.”

Holabird said the gold fingerprinting technology is part of the “evolving science that we have all been doing over the years. This is what the tests would contribute to answering.”

The nugget was on display at the February 2011 Long Beach Coin, Stamp & Collectibles Expo and the American Numismatic Association National Money Show in Sacramento, Calif., in March.

The sale of the nugget attracted the attention of local and national radio, television and print media.

The giant nugget was one of three nuggets found in the same area “within just a small space,” Holabird wrote in the Holabird-Kagin Americana lot listing.

According to the auction lot description, the nugget was considered to be possibly “the sole remaining authenticated large gold nugget of 100 troy ounce caliber” from the original California Gold Rush region.

The nugget was said to be found using a metal detector and came from an unmined area known as the “blue lead” or bottommost layer of the Tertiary gold channels in California, according to the auction lot description.

“While 100 [ounce] nuggets are known from Australia and Mexico, I couldn’t think of a single specimen still in existence from California,” Holabird said in the lot listing. “Or at least any that I had seen or known of in museums, including the Smithsonian and the Mariposa Gold Museum.” ¦