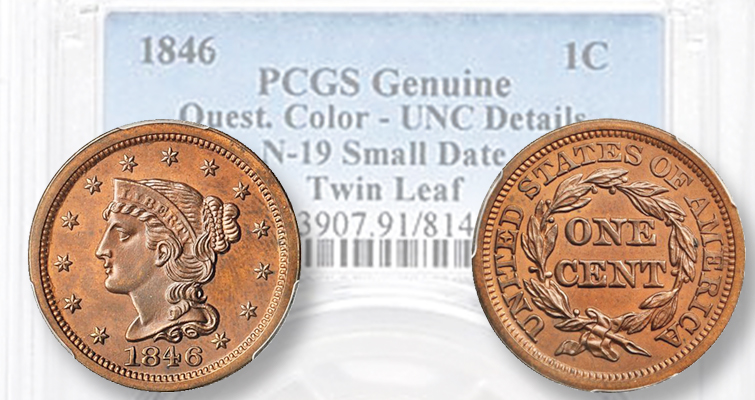 The originality of the red color on this 1846 Coronet cent graded PCGS Uncirculated Details, Questionable Color, is open to some debate. It sold for $705 at Part III of The Twin Leaf Collection. 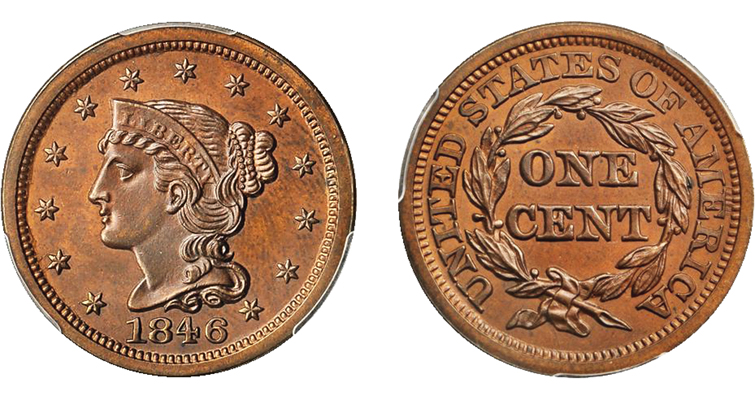 A closer look at the 1846 Coronet cent graded PCGS Uncirculated Details, Questionable Color, that sold for $705 at Part III of The Twin Leaf Collection.

The November offering of 233 lots consisted of the collector’s duplicates, but there were many notable coins even in these extras. Here is the third of three we're profiling in this week's Market Analysis.

Collectors love Mint State copper coins to have as much original Mint red color as possible. Sometimes, people will enhance a coin to simulate an original Mint red bloom. Much like with improper cleaning — where there can be a clear difference between obviously cleaned and obviously original, but a vast gray area in between — a “Questionable Color” designation is sometimes challenged.

PCGS graded this 1846 Coronet cent, Newcomb 19, Uncirculated Details, Questionable Color, but Stack’s Bowers notes that, while it has “somewhat subdued mahogany and faded tan with pale blue overtones seen at a certain angle to the light,” the auctioneers conclude, “we firmly believe that the color is original if a trifle unusual.”

The “controversial” large cent, which was offered in 1954 as part of Stack’s sale of the Charles J. Dupont Collection, sold for a modest $705 on Nov. 3. 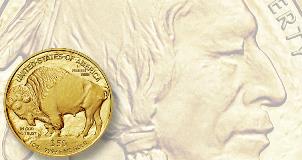