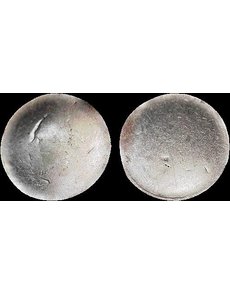 Despite a far weaker strike, this Roosevelt dime shows well-developed reeding along the northern arc of its edge. Images shown elsewhere show the rim and edge details of the same coin. 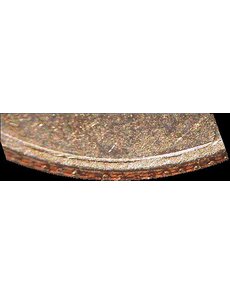 A trace of the design rim and adjacent field is seen on the reverse face, next to the reeding, on the more weakly-struck Roosevelt dime. 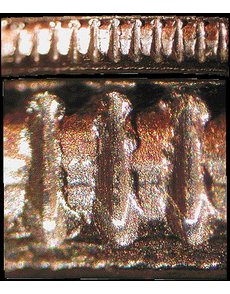 The grooves in the edge and their flanking burrs were carved out when the off-center planchet was forced down into a stiff collar by the descending hammer die for the weaker dime. 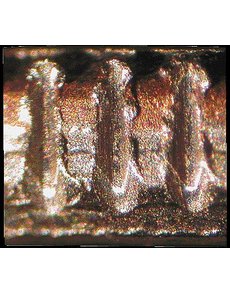 A conventional stiff collar error is seen in a 1998-P Washington quarter dollar. 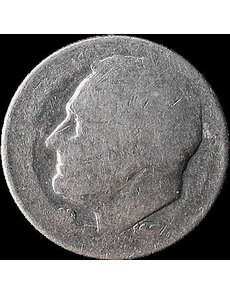 Images by Mike Diamond.The edge of this weakly-struck Roosevelt dime is devoid of reeding.

One diagnostic feature of an exceedingly weak strike is the absence of reeding. The dies’ feeble impact fails to generate any planchet expansion. As a result, the edge of the planchet is not forced into the vertical ridges on the collar’s working face. The smooth edge of the unstruck planchet is retained. A weakly-struck dime illustrates this principle (see photo).

A far weaker strike appears on a second dime. The obverse shows only a faint trace of Roosevelt’s face. The reverse design is represented only by one or two faint dimples. How, then, can we explain the presence of well-developed reeding at 12:00 (obverse clock position)? The reeding fades out at both ends, with the entire arc of reeding extending from 10:00 to 2:00.

This dime is one of at least seven similar examples that have appeared on the online auction site eBay over the last several months, all from the same seller. Some of the strikes are even weaker than this piece. I suspect all of these partly-reeded dimes came from the same malfunctioning press.

I initially toyed with the idea that this could be false reeding, produced by edge-to-edge contact when a newly-struck dime is rolled and squeezed against an unstruck planchet. False reeding generated by this mechanism is characterized by broad valleys and narrow ridges. However, the reeding in this dime shows the narrow valleys and broad ridges of genuine reeding.

The reeding and the reverse face show a number of anomalous features. Each of the deeper grooves is flanked by burrs and terminates in a burr that points toward the reverse face. On the reverse face, next to the arc of reeding, a weak design rim appears, along with a little bit of the adjacent, die-struck field. No evidence of die contact is seen in the same area on the obverse face.

I eventually realized that the reeding in this coin was not produced by planchet expansion or any horizontal impact between the collar and the planchet’s edge. It was also not produced during the final phase of the hammer die’s downstroke. Instead, the reeding was produced early in the downstroke. This dime represents a weak strike in combination with a stiff collar error.

In the press that struck this coin, the reverse die functioned as the hammer die (inverted die installation). The collar was unusually stiff or completely frozen in the “up” position. The planchet represented by this coin was fed into the press slightly off-center.

When the hammer die descended, the planchet was trapped between the hammer die and the stiff collar. The edge of the planchet was forced down along the sharp ridges of the collar’s working face. This carved out the grooves and pushed up the burrs. The resistance provided by the stiff collar was sufficient to allow the design rim and adjacent field to strike up in this area.

The causal mechanism underlying this feature is essentially the same as a Type I stutter strike. The latter error also features peripheral die-struck details restricted to one pole of the coin’s upper face as the result of resistance provided by a stiff collar (see Collectors’ Clearinghouse, Dec. 28, 2009).

Once the hammer die reached the lowest point of its downstroke, it was just close enough to the anvil (obverse) die to produce a faint image.

Conventional stiff collar errors, like that seen in the accompanying 1998-P Washington quarter dollar, are most often associated with inverted die setups and the high-speed Schuler press. They also tend to be repetitive (many similar errors produced in a row). It is therefore not surprising to find a stiff collar error in association with a second malfunction — a weak strike caused by excessive minimum die clearance. Like other repetitive stiff collar errors, the point of contact with the collar — and thus the reeding — is always in the vicinity of 12:00 in these weakly-struck dimes.

I would not be surprised if someone eventually discovers partial reeding on a dime planchet without any detectable design on either face. However, I suspect that close inspection would reveal at least a trace of the design rim at one pole of the presumptive upper face.