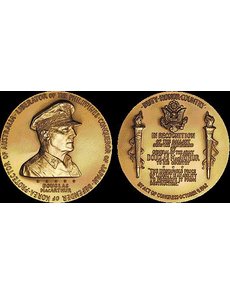 1.5-inch bronze duplicates of the congressional gold presented in 1962 to Douglas MacArthur as general of the army will be included in the 2013 5-Star Generals Profiles Collection set. Shown is the actual gold medal housed at The MacArthur Memorial Museum in Norfolk, Va. 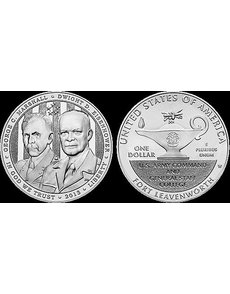 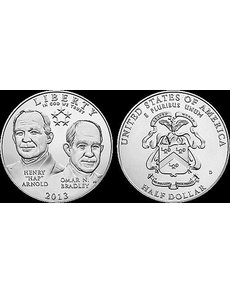 Five-star Gens. Henry “Hap” Arnold and Omar N. Bradley are depicted on the obverse of the copper-nickel clad half dollar.

Sales are scheduled to begin at noon Eastern Time Aug. 5.

The Profiles set will contain an Uncirculated 2013-W 5-Star Generals silver dollar depicting conjoined portraits of Gens. George C. Marshall and Dwight D. Eisenhower; an Uncirculated copper-nickel clad 2013-D half dollar depicting conjoined portraits of Gens. Henry “Hap” Arnold and Omar N. Bradley; and in place of the gold half eagle depicting Gen. Douglas MacArthur, a 1.5-inch bronze duplicate of the congressional gold medal presented in 1962 “in recognition of the gallant service rendered by General of the Army Douglas MacArthur to his country. ...”

The price of the 2013 5-Star Generals Profiles Collection set is $74.95, according to a Mint announcement posted July 2 on the Federal Register online.

U.S. Mint officials will impose no household ordering restrictions for the Profiles set. Shipping will begin in early September, according to Mint officials.

The actual gold medal presented to MacArthur is housed at the MacArthur Memorial Museum in Norfolk, Va.

The obverse of the medal, depicting a portrait of MacArthur facing to the viewer’s right, was designed and sculptured by assistant Mint engraver and later chief engraver Frank Gasparro.

The medal’s reverse was also designed and sculptured by Gasparro. It features along the top border the inscription . DUTY . HONOR.COUNTRY. with the Great Seal of the United States below. Centered in the middle of the design flanked by two ribbon-draped torches is the inscription IN RECOGNITION / OF THE GALLANT / SERVICE RENDERED / BY / GENERAL OF THE ARMY / DOUGLAS MACARTHUR / TO HIS COUNTRY / ? ? ? “THE INESCAPABLE PRICE OF LIBERTY IS AN ABILITY TO PRESERVE IT FROM DESTRUCTION.” Along the bottom border is inscribed by ACT OF CONGRESS . OCTOBER 9, 1962.

The obverse of the silver dollar was designed by Richard Masters, a master designer with the U.S. Mint’s Artistic Infusion Program, and sculptured by U.S. Mint Medallic Sculptor Joseph F. Menna. The reverse, depicting the Leavenworth Lamp bearing the heraldic crest of Fort Leavenworth on its side, was designed by AIP Master Designer Barbara Fox and sculptured by Menna.

The obverse of the copper-nickel clad half dollar was designed and sculptured by U.S. Mint Medallic Sculptor Phebe Hemphill.

The reverse, depicting the heraldic crest of Fort Leavenworth, was also designed and sculptured by Hemphill.

The easel-type packaging of the 2013 5-Star Generals Profiles Collection set will include informative profile cards for each general with photos, historic military information, plus some fun facts readers may not know, according to Mint officials.

Also included is a certificate of authenticity signed by the acting director of the United States Mint, Richard A. Peterson.

The Profiles set is the second limited-edition set to be offered in the program. A three-coin Proof set — containing Proof versions of the gold $5 half eagle, silver dollar and copper-nickel clad half dollar — limited to an edition of 50,000 has already sold out.

All of the coins remain available individually in Proof and Uncirculated conditions.

Customers will be able to order the Profiles set via the Mint’s website at www.usmint.gov or by telephone at 800-872-6468.

Hearing-impaired or speech-impaired customers with special text telephone may call the Customer Service Center at TTY: 888-321-6468. ¦