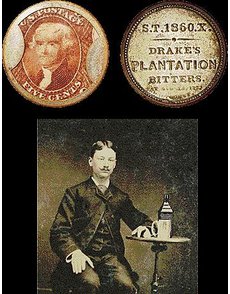 A Drake’s Plantation Bitters encased postage stamp is illustrated with a tintype showing a man with the Drake’s product.

In numismatics, encased postage stamps are favorites of many.

These consist of a circular brass frame displaying a colorful postage stamp behind a clear mica panel, and with an advertisement embossed on the reverse of the brass encasement.

John Gault patented them on Aug. 12, 1862, after which they were made by the Scovill Manufacturing Co. of Waterbury, Conn.

More than 30 merchants, hotels and others signed up to buy them. In the early 1900s these were one of the hottest tickets in the coin market. Today, they remain in strong demand. Most sell in the hundreds of dollars.

Among encasements, those advertising Drake’s Plantation Bitters are especially interesting. On the back is the mysterious inscription, S.T.1860.X. What does it mean?

Col. Patrick H. Drake started a patent medicine business in the 1850s with a product he named Catawba Bitters. In 1860, he slightly altered the ingredients and renamed the beverage Drake’s Plantation Bitters, packaged in bottles shaped like a log cabin. The chief constituent of the drink was West Indian rum, nearly 100 proof; the flavorings included Angostura bitters, chamomile, cardamom, orange and raisins.

Drake’s bitters found a ready market. For one thing, alcohol was taxed and bitters were not since they were classed as “medicine.” Also, temperance societies frowned on drinking liquor but overlooked the use of such “medicines.”

The secret to Drake’s meteoric success was his skill with advertising. Featured was the enigmatic cryptogram S.T.1860.X. Drake plastered this “slogan” everywhere he could, along the route of the Pennsylvania Railroad, at Niagara Falls, along the scenic banks of the Hudson River, and in Franconia Notch, N.H. Advertising proved so unsightly that the New York State Legislature was moved to curtail outdoor advertising.

The meaning of the cryptogram was never fully explained. Drake himself is said to have told friends that it had no meaning at all. Some felt that it meant “Started Trade in 1860 with X dollars,” with X being the Roman numeral for 10. However, Drake was selling potions before that time.

In the 1871 edition of the company’s almanac, Morning, Noon, and Night, it was explained as S.T. standing for Saint, 1860 for Croi, and X being itself, the whole meaning St. Croix, the source of the company’s rum. Whatever the truth of the matter, the mysterious nature of the cryptogram helped boost the sales of Drake’s product.