Summing up the rare coin market in 2013 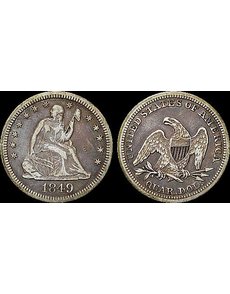 How can someone evaluate a year in the rare coin market? In 2013, top rarities were up, gold and silver were down, and the U.S. Mint sold record numbers of 2013 American Eagle silver bullion coins. Quality ruled and so-so coins struggled.

Dealer reports have been optimistic about the year that’s been, but that’s not unusual. It’s tough to ever get a dealer to say he or she has had a bad year.

The Professional Numismatic Guild said in a press release that the market “roared” in 2013 and cited an aggregate total of U.S. coins at major public auctions in 2013 at nearly $393 million.

There’s no question that the top of the market is as strong as ever.

A 1794 Flowing Hair silver dollar at just over $10 million led the top lots for 2013, followed by familiar rarities like an 1804 Draped Bust silver dollar and a 1913 Liberty Head 5-cent piece that brought $3.88 million and $3.17 million respectively.

Two Coiled Hair $4 Stella patterns dated 1879 and 1880 were among the 11 U.S. coins that brought more than $1 million at auction in 2013. Two 1792 half disme patterns also exceeded the $1 million mark as did three coins from Eric P. Newman’s collection.

Interestingly, more than half of the coins that broke $1 million were 18th century rarities, and gold coins were represented by just the two Stella $4 patterns.

The PNG broke down each auction house’s market share as follows: Heritage dominated at $236.5 million, Stack’s Bowers Galleries was next at $105 million followed by Larry & Ira Goldberg at $21.1 million and Bonhams at $13.5 million. Legend-Morphy, David Lawrence, Scotsman and Krueger and Krueger rounded out the list.

The past year wasn’t great for precious metals. Gold started off 2013 at the $1,680 an ounce level and dipped below the $1,200 level as the year closed. Silver started 2013 at around $31 an ounce and was hovering around $20 an ounce as the year ended. Yet, the Mint sold record numbers of silver American Eagles, as noted.

Dealers report that many classic, but accessible, lower grade key coins like 1932-D and 1932-S Washington quarter dollars and 1914-D and 1931-S Lincoln cents are tough sells. Collectors are asking: If I’m going to spend money on a key date, why not pay a bit more and get something a little nicer? So-so (yet still expensive) coins remain a tough sell. ¦