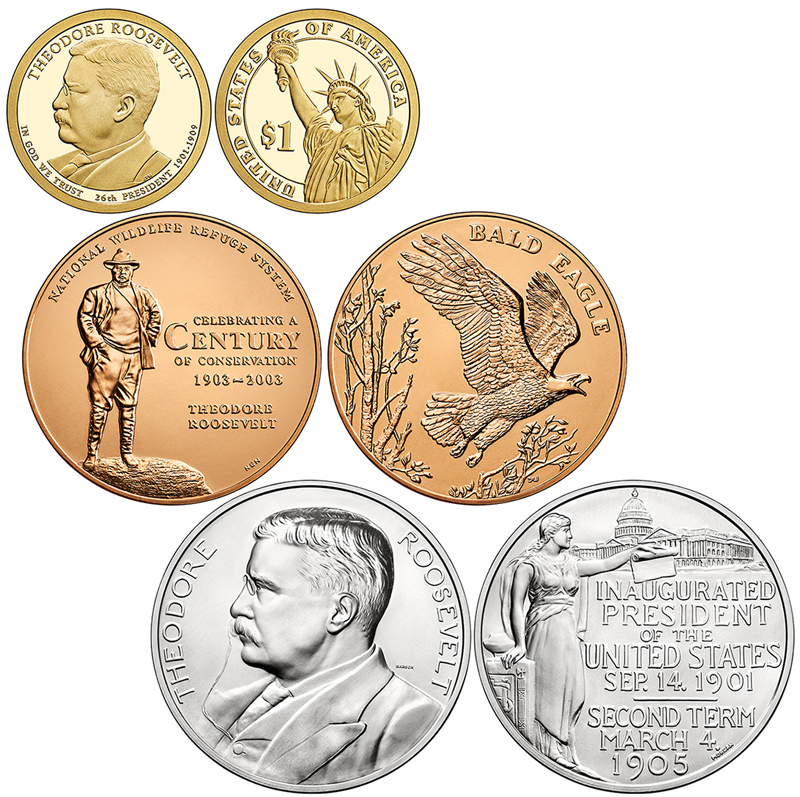 Theodore Roosevelt is featured on a (from top down) Presidential $1 coin, a bronze medal from the National Wildlife Refuge System Centennial Medal Series, and a .999 fine silver Presidential Medal.

Keep up with all CoinWorld.com news and insights by signing up for our free eNewsltters, liking us on Facebook, and following us on Twitter. We're also on Instagram!

A First Family of U.S. coins is the focus of a new PBS documentary series by famed director and producer Ken Burns.

The Roosevelts: An Intimate History is a seven-part, 14-hour Burns epic focused on the lives of Theodore, Franklin and Eleanor Roosevelt. It began airing Sept. 14.

“It is the first time in a major documentary television series that their individual stories have been interwoven into a single narrative,” the series description on the PBS website reads.

Eleanor is the wife of Franklin, the 32nd president of the United States, and is also the niece of Theodore, the 26th U.S. president. Franklin and Theodore, meanwhile, are fifth cousins.

Of course, the Roosevelts are a popular group in numismatics.

Franklin is the only Roosevelt on circulating change. The president who led the United States during much of World War II has been featured on our dimes since 1946.

Though Franklin’s the only one we see regularly in our change, all three have been featured on U.S. Mint coins and medals.

Both Franklin and Eleanor were featured in 2014 on coins in the Mint’s Presidential $1 series and First Spouse gold coin series, respectively.

Theodore’s Presidential dollar was released in 2013 along with those of William McKinley, William Howard Taft and Woodrow Wilson.

The elder Roosevelt was also featured on a number of medals offered during the last 11 years — five in the 2003 National Wildlife Refuge System Centennial Medal Series (one bronze, four silver) and the other a .999 fine silver Presidential medal.

A bronze Bald Eagle medal from the Wildlife Refuge series and the silver Presidential medal were featured in a special set offered by the U.S. Mint in 2013, along with a Theodore Roosevelt Presidential dollar. The set is listed as sold out on the Mint’s website.

The silver medal’s obverse features a head-and-shoulders portrait of Theodore and the reverse includes a standing Columbia to the left of the date of his first Inauguration, Sept. 14, 1901, and the start of his second term on March 4, 1905.

The bronze medal features a standing Theodore in his recognizable outdoorsman garb (Roosevelt was a wildlife enthusiast who was behind the foundation of the U.S. National Park Service system) and the inscription, CELEBRATING A CENTURY OF CONSERVATION, and 1903-2003. The reverse design is centered around a bald eagle in flight.

Though final designs have not been announced, Franklin Roosevelt will likely be depicted on the 2015 March of Dimes commemorative silver dollar. Franklin was associated with the March of Dimes program as one of the most prominent victims of polio in the world. It would be his second appearance on a modern commemorative coin; he also appears on a 1997 gold $5 half eagle issued in Proof and Uncirculated versions.