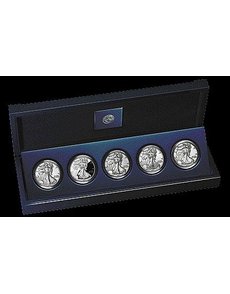 Prices on the secondary market for the sold-out 2011 American Eagle 25th Anniversary Silver Coin set have jumped to nearly $4,000 for a five-coin set, both certified and uncertified.

Secondary market prices for the sold-out 2011 American Eagle 25th Anniversary Silver Coin set have already climbed to multiples of the $299.95 issue price charged by the U.S. Mint on Oct. 27.

The sets are being offered via print advertising, online advertising, eBay auctions and television promotions. Sellers are offering the sets at prices that start at a minimum of double the original issue price, to a high of $7,500 for five sets still sealed in their original shipping box as shipped from the Mint.

However, the Mint had not shipped any of the sets, as of Nov. 4.

During the first week after sales began and ended Oct. 27, the ceiling for pricing for the sets from most sellers was approximately $4,000, although one seller asked nearly $5,400 for a five-coin set with all the coins in the set certified by a major third-party grading service as having the coveted Mint State 70 or Proof 70 grade.

The $4,000 price ceiling was noted both for uncertified five-coin sets and for many offerings of sets with all five coins guaranteed to bear MS-70 and Proof 70 grades from a major grading service.

Some sellers were offering the coins individually, with several eBay sellers offering the 2011-P Reverse Proof American Eagle silver dollar from the set — one of two coins available only in the set — at $1,095 each in certified Proof 70.

Hundreds of pre-sale offerings posted online before the Oct. 27 sale by the Mint offered the sets at significant premiums over the issue price, with the disclaimer that sales would be voided if the seller could not secure the coins, or in the case of offers for certified coins, if the advertised grade were not assigned by the grading service.

Those ordering the sets from the Mint online and by telephone Oct. 27 were limited to five sets per household. The maximum 100,000 sets were sold out within four-and-a-half to five hours, with sales beginning at noon Eastern Time.

Many customers attempting to order the sets online experienced a slow website. Those attempting to order by telephone reported prolonged busy signals despite a greater number of phone operators than usual. Tom Jurkowsky, director of the U.S. Mint’s Office of Public Affairs, said Nov. 3 that while the Mint’s order fulfillment contractor, Pitney-Bowes Government Solutions in Plainfield, Ind., normally has 31 telephone operators on duty during off-peak periods, all 107 telephone operator stations were being used for the 25th Anniversary set sales.

Some customers were unsuccessful in placing orders because of the demands placed on the Web servers and phone lines.

The Mint accepted orders for more than 100,000 sets, with orders received beyond the maximum authorization limit placed on a waiting list. Orders on the waiting list will be filled in the order in which they were received should any previous orders be canceled for any reason.

Secondary market sales proved brisk for one Coin World advertiser, Chattanooga Coin Inc., in Rossville, Ga., which reported that it sold out of its pre-order option of $799 per set, according to its ads in the Nov. 14 and Nov. 21 issues of Coin World.

Chattanooga offered the set at $899 for coins certified MS-69 and Proof 69 by Numismatic Guaranty Corp., and accompanied by the original Mint packaging.

The silver five-coin sets from the U.S. Mint comprise:

? One Uncirculated 2011-W coin from the West Point Mint with the finish designated in the numismatic community as “Burnished Uncirculated.”

? One Reverse Proof 2011-P American Eagle silver dollar struck at the Philadelphia Mint with P Mint mark. This coin is only available in the anniversary set.

? One 2011 silver bullion coin, without Mint mark, although U.S. Mint officials have indicated the pieces will be San Francisco Mint strikes.

? One Uncirculated 2011-S American Eagle bearing the San Francisco Mint’s S Mint mark. This coin is only available in the anniversary set.

The sets, assembled at the San Francisco Mint, were not scheduled to begin to be shipped to the customers who ordered them until mid-November. Production of all the coins contained in the 100,000 sets was completed weeks before the Oct. 27 sales launch. ¦