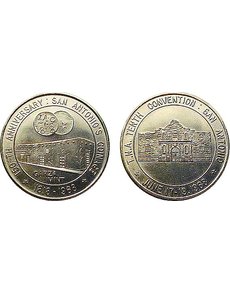 A copper-nickel medal was issued in 1968 by local coin clubs in San Antonio honoring the 150th anniversary of the Garza Mint of San Antonio, the Texas Numismatic Association’s 10th anniversary convention and the Alamo.

These two medals were obtained several years ago. One appears to be brass and features the Garza Mint. The other appears to be silver, with the obverse showing the Texas World’s Fair and the 250th anniversary of San Antonio. I have searched several sources, trying to learn more information regarding their issue and value.

These medals were issued on the occasion of the Texas Numismatic Association’s 10th anniversary convention in 1968.

Two different obverse designs were paired with one common reverse design that depicts the Alamo.

The other obverse honors the 150th anniversary of the Garza Mint, a mint established in 1818 in San Antonio under Spanish rule.

Frank Galindo, the Texas Numismatic Association’s Medals Officer, writes: “These medals from 1968 are not official Texas Numismatic Association (TNA) medals. They were issued by the local coin clubs in San Antonio when they hosted the tenth TNA convention. TNA was not involved with this medal project; therefore, they are not official TNA medals. These medals were designed, struck, issued, and sold by the local clubs, not TNA. TNA has no records about these medals because they were not issued by TNA. The following year, in 1969 at the eleventh convention, TNA decided to begin issuing their first convention medal.”

From two 1968 Coin World articles, it is recorded the medals were struck by Cajun Coins of Mandeville, La., and issued in four compositions: gold, silver, copper-nickel and bronze. In addition, 23 test strikings were struck in lead, presented to Dr. William A. Burns of San Antonio’s Witte Museum.

It is difficult to precisely value these pieces today. A bronze version featuring the Garza Mint was being offered for sale on eBay for a buy-it-now price of $42.95. A copper-nickel version of the same medal is listed at $4.99.

Values of silver and gold examples would likely be based upon their precious metal content.