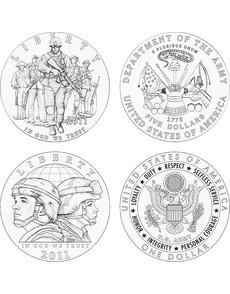 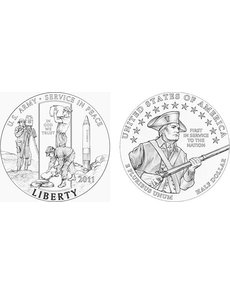 The design unveiling for the three coins was held between the third and fourth quarters of the game at Liberty Financial Field, home to the National Football League’s Philadelphia Eagles.

The program comprises a copper-nickel clad half dollar, a .900 fine silver dollar and a .900 fine gold $5 half eagle honoring the nation’s oldest military branch. The U.S. Army was established on June 14, 1775.

The commemorative coins are scheduled to go on sale sometime in early February, with purchase prices to be announced Jan. 31.

“The designs for the 2011 U.S. Army Commemorative Coins unveiled today celebrate our magnificent Army’s storied history and heritage and signify a remarkable public tribute to every American Soldier who has served our nation in war and in peace,” noted Secretary of the Army John M. McHugh following the Dec. 11 unveiling.

The purchase price of each half eagle will carry a $35 surcharge; each dollar, a $10 surcharge; and each half dollar, a $5 surcharge. Surcharges, after the U.S. Mint recoups product costs, will be paid to the Army Historical Foundation to support the construction of the National Museum of the United States Army at Fort Belvoir, Va.

The enabling act calls for the designs to be emblematic of the traditions, history and heritage of the U.S. Army and its role in American society from the Colonial period to the present.

The half eagle’s design represents the subtheme “Service in War.”

The reverse was designed and sculptured by U.S. Mint Medallic Sculptor Joseph F. Menna. It is based on the official U.S. Army emblem and represents the unbroken history of loyalty and commitment to defend the nation.

The silver dollar’s designs symbolize the subtheme of “Modern Service.”

The obverse was designed by AIP Master Designer Richard Masters and sculptured by U.S. Mint Medallic Sculptor Michael Gaudioso. It depicts back-to-back portraits of a male soldier and female soldier over a partial globe, symbolizing worldwide deployment of the 21st century U.S. Army.

The reverse design symbolizes the seven core values of the U.S. Army (loyalty, duty, respect, selfless service, honor, integrity and personal courage). It features an image of the Great Seal of the United States, worn on U.S. Army dress and service uniforms since the early 1800s. The reverse was designed by AIP Master Designer Susan Gamble and sculptured by U.S. Mint Sculptor-Engraver Donald Everhart II.

The Proof silver dollar is being struck at the Philadelphia Mint with the P Mint mark and the Uncirculated dollar at the San Francisco Mint with the S Mint mark.

The copper-nickel clad half dollar features the subtheme “Service in Peace.”

The obverse of the coin, to signify the contributions of the U.S. Army during peacetime, features a U.S. Army soldier surveying, two servicemen building a flood wall and a Redstone Army rocket used during early space exploration. The obverse was designed by AIP Master Designer Donna Weaver (who is also a retired U.S. Mint sculptor-engraver) and sculptured by U.S. Mint Sculptor-Engraver Charles L. Vickers.

The reverse, symbolizing the U.S. Army as the first military service to defend the country and its key role in the nation’s internal development, features an enlisted Continental soldier armed with a musket, along with 13 stars representing the original Colonies.

The reverse was designed by AIP Master Designer Thomas Cleveland and sculptured by Menna.