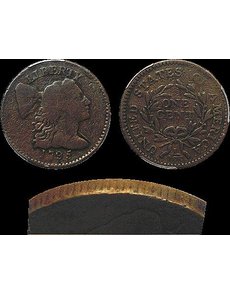 The 1795 Liberty Cap, Reeded Edge cent is key to assembling a collection of large cents by Sheldon variety. At PCGS Very Good 10, it is the finest of seven examples confirmed known, and last sold at auction in 2009 for $1.265 million. 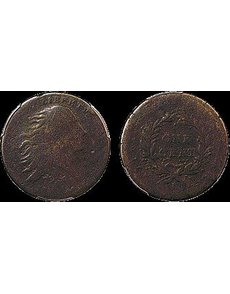 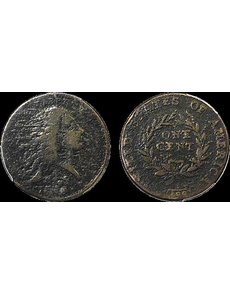 The first United States copper coin to break the $1 million barrier at auction will make a return visit to the auction block in January.

The 1795 Liberty Cap, Reeded Edge cent, cataloged as the Sheldon 79 die marriage in Penny Whimsy by William H. Sheldon, is the top highlight of the Adam Mervis Collection, to be offered by Heritage Auctions Jan. 9. The auction will be conducted in Orlando, Fla., in conjunction with the Florida United Numismatists Convention.

The coin last sold Sept. 6, 2009, for $1.265 million, by Ira and Larry Goldberg Auctioneers in conjunction with McCawley-Grellman, The Copper Specialists, in the sale of the Dan Holmes Collection of Early Date Large Cents, Part I.

Considered the finest known 1795 Liberty Cap, Reeded Edge cent among seven examples confirmed, the coin is one of some 1,200 lots comprising the Mervis large cent collection.

The collection also boasts two of the four known varieties of 1793 Flowing Hair, Wreath, Strawberry Leaf cents. The varieties derive their name from the plant appearing below Liberty’s portrait and above the date.

The Strawberry Leaf cents are classified as noncollectible varieties because they are known by three or fewer examples.

Mervis assembled the bulk of his collection of large cents over a four-year period between 2007 and 2011 with the guidance of Greg Hannigan from Hannigan’s Rare Coins/U.S. Currency LLC in Royal Palm Beach, Fla.

The Mervis Collection includes all 302 Sheldon die marriages that fall outside of the “noncollectible” category, according to Hannigan, who sold Mervis all the coins in his large cent collection.

The Mervis/Hannigan numismatic collaboration began in 2006 when Mervis purchased from Hannigan via eBay an 1844 Coronet cent certified Mint State 65 red and brown by Numismatic Guaranty Corp.

A decisive moment in the assemblage of the Mervis Collection came with Hannigan’s placement of the winning bid in 2009 for the 1795 Liberty Cap, Reeded Edge cent, a bid that almost didn’t get placed as Mervis hesitated.

Hannigan had been provided with Mervis’ bidding limit before the lot containing the 1795 Reeded Edge cent opened. Once bidding began, it soon eclipsed Mervis’ limit.

Hannigan said Mervis had wanted to acquire the coin for $900,000 or less, but Hannigan said he told Mervis that to win the coin would take $1 million or more. And it did.

Mervis’ lots from the Holmes sale, for which Hannigan placed the winning bids, cost more than $2.5 million, Hannigan said.

Mervis, 52, said that although he began his numismatic collecting some 40 years ago filling holes in Whitman coin folders, his interests multiplied six or seven years ago with the attention given by his then 13-year-old son, Alec.

Alec has the better eye for coins, and he especially liked the early dates, Mervis said. That, coupled with the older Mervis’ meeting with Hannigan, put him on the road to aggressive pursuit of the large cents by Sheldon variety.

Mervis credits Hannigan’s tenacity and enthusiasm in the effort to help him attain his collecting goals with the large cents.

At the 2009 Holmes auction, where he purchased the 1795 Reeded Edge cent, Hannigan also acquired the two 1793 Strawberry Leaf cents for his own collection.

Hannigan didn’t decide to part with the coins until 2010, when he broached the subject with Mervis before a scheduled trip to meet Holmes at his Cleveland, Ohio, home and discuss their common zest for large cents.

Hannigan said he brought the Strawberry Leaf cents with him on that trip and handed them over to Mervis. Hannigan said he provided Mervis the opportunity to consummate the deal several months later, with payment in 2011.

The obverse of the Holmes/Mervis 1795 Liberty Cap, Reeded Edge cent is plated in Early American Cents, the predecessor title of Penny Whimsy.

The coin has a reeded edge instead of the common edge device ONE HUNDRED FOR A DOLLAR.

The reasoning for the reeded edge is unknown. Breen suggested the reeding was “an experiment which proved to be a needless frill, adding to the cost of manufacture without compensatory advantage.” The 1795 Reeded Edge cent is key to completing a collection of Sheldon numbered die varieties of early large cents.

Sheldon divided the 1793 Flowing Hair, Wreath cents into nine varieties having sufficient extant examples for collectors to acquire and four varieties that at the time he designated as noncollectible.

The NC-2 Strawberry Leaf cent, the only example of the variety known, is graded PCGS Fair 2.

The NC-3 example in the Mervis Collection is certified PCGS Good 4 and is the second finest of three examples known.

Discovered before 1869 by pioneer copper collector Richard Winsor, the Strawberry Leaf obverse design was initially called the “Clover Leaf.” The plant depicted on the cent below the portrait of Liberty is distinctive and quite unlike the three-leaved plants shown on the other cents of the 1793 Flowing Hair, Wreath obverse design type. No one knows specifically what plant Mint die sinker Adam Eckfeldt intended by what is now called the “Strawberry Leaf,” nor the reason why such a startling change was implemented.

Collector John Meader, according to the pedigree for Mervis’ NC-2 variety, had pulled the 1793 cent from circulation in 1845.

The first example of an NC-3 1793 Strawberry Leaf cent is reported to have been discovered in the 1940s by William Rabin.

The same edge device appears on the NC-3 1793 Strawberry Leaf cent in the collection of the American Numismatic Society.

The edge device provided researchers with sufficient evidence that all of the Strawberry Leaf cents were struck at the Philadelphia Mint at or near the time of the aforementioned Sheldon Vine and Bars Edge varieties.

Additional detailed information on the Strawberry Leaf cents can be found in the March 2005 issue of Penny-Wise, published by Early American Coppers.

Hannigan said he and Mervis were excited about being able to assemble such a collection of large cents in such a short period of time, joining the ranks of legendary large cent collector and Kentucky distiller Robinson S. Brown, who assembled a Sheldon variety set — twice.

And despite Mervis’ collection of large cents not yet having crossed the auction block, Hannigan said he and Mervis have already been discussing the assemblage of another Sheldon set of early large cents. ¦