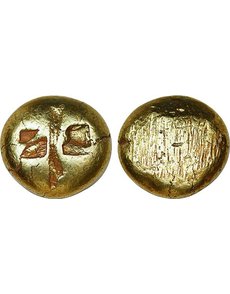 A circa 670 to 660 B.C. striated electrum stater from Ionia that could represent the first true coin type in ancient coinage history highlights the ancient coin offerings in Heritage Auctions’ Long Beach Coin & Collectibles Expo auction. One of 12 known examples of the type and in Good Very Fine condition, it has an estimate of $55,000 to $60,000.

The circa 670 to 660 B.C. coin, from an uncertain mint, is one of 12 known examples of the type, all of which feature striations on the obverse that the auction cataloger suggests represents the cornerstone of ancient coinage.

Citing Joe Linzalone’s new book, Electrum and the Invention of Coinage, the lot listing notes that “pre-weighed lumps of electrum, some marked with a rough punch, had been employed as a medium of exchange for some years before this issue, but they lacked anything that could be called an obverse ‘type’ or design.”

Linzalone suggests the marks on these rare electrum issues represent the ripples of water where electrum was found naturally occurring in the stream beds of Lydia and Ionia, the epicenter of early coinage conception.

The example for sale weighs 14.32 grams, making it one of “only 12 striated full-weight staters” known to exist, according to the auction house.

It is one of many highlights from a catalog of 481 ancient Greek and Roman coins and antiquities, which includes the Eid Mar silver denarius of Marcus Junius Brutus (see Coin World, Sept. 5 issue) from the Rubicon Collection of Roman Coins.

According to the firm, the Rubicon Collection is a “small but significant holding created by an Arizona private collector over a 15-year period.” The collection focuses on Imperatorial and early Roman Imperial issues.

A 15 percent buyer’s fee will be added to the final closing price of each lot won.

Roman Republic, circa 46 to 45 B.C. gold denarius, Gnaeus Pompey Jr. as Imperator, “perhaps fewer than 10 specimens in existence, of which this is easily the finest known,” Lot 23263, Fleur-de-Coin.

Roman Imperial, A.D. 14 to 37, reverse die for denarius from the Lugdunum Mint, “case-hardened bronze with a silver denarius of Tiberius (‘Tribute penny’ type) stuck in place,” “the presence of a silver denarius in the obverse indicates that during the course of striking, a denarius became lodged in the reverse die and caused the striking of an indeterminate number of brockages,” Lot 23297, in custom wood and glass presentation case.