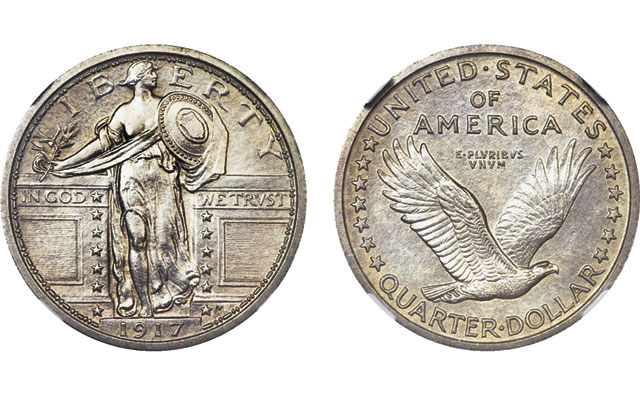 A 1917 Standing Liberty quarter dollar, Type 1, once considered a Proof but now thought of as a business strike, brought $646.25 at Heritage’s Oct. 27 auction of the Gardner Collection.

The story: This quarter is fascinating because it was once thought of as a Proof by Walter Breen, an expert who dominated numismatic research in the 1970s through early 1990s. When offered at a March 1996 Stack’s Bowers auction, this coin was accompanied by a Breen letter authenticating it as a Proof striking. No Mint records confirm the production of Proof 1917 Standing Liberty, Bare Breast quarters (Type 1), but Breen noted the raised edges (or “fins”), sharp details and rich, satiny texture and characterized it as a Proof.

Both Numismatic Guaranty Corp. and Heritage believed that the piece is a business strike intended for circulation, and the unusual quarter, in an NGC Uncirculated Details, Improperly Cleaned, holder brought $646.25. That price, while a fraction of what it would bring if an authentic Proof, is still an impressive price considering that typical examples in this grade sell at the $200 level generally.