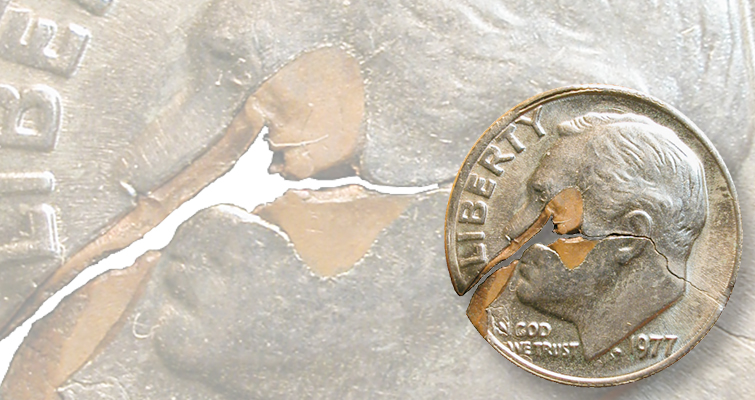 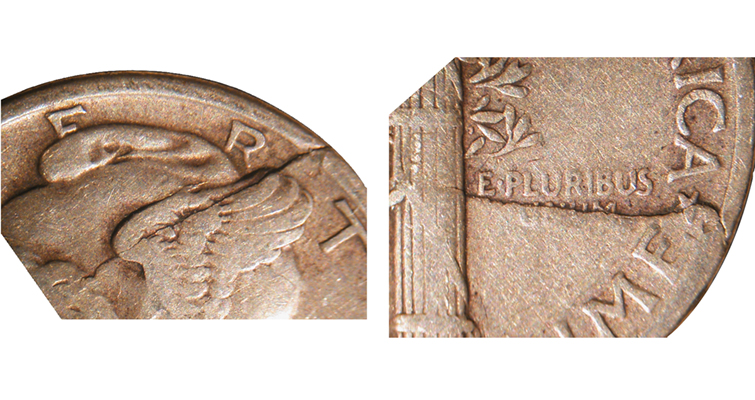 This 1945 Winged Liberty Head dime shows a planchet crack that formed before or during the strike. Note the weakness on the reverse along the letters of UNUM. 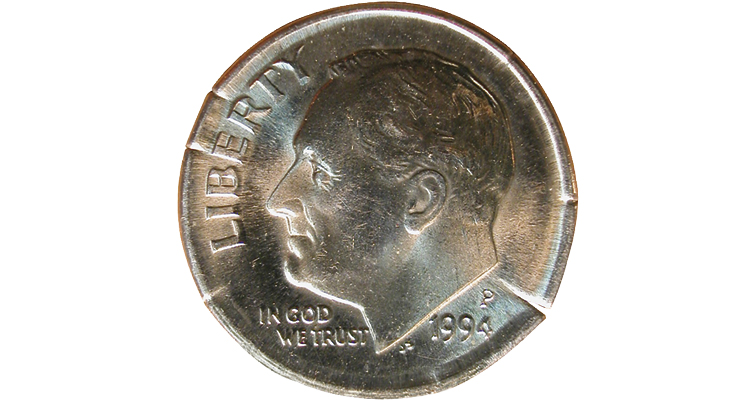 Seven short radial stress splits converge from the edges of this broadstruck 1994-P Roosevelt dime, which was struck outside the collar. 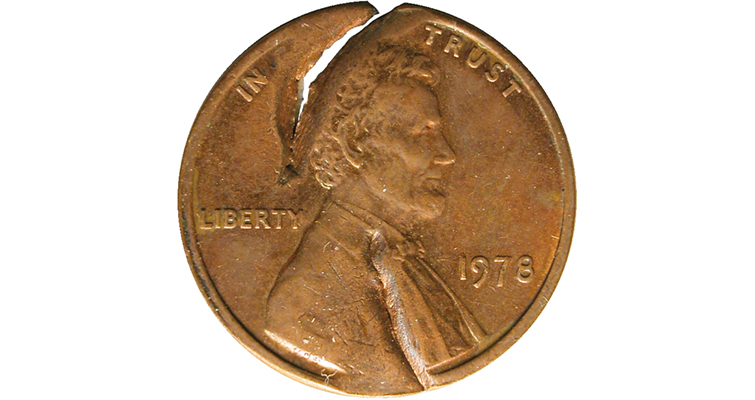 Two rolling-induced fissures invade the body of this 1978 Lincoln cent. 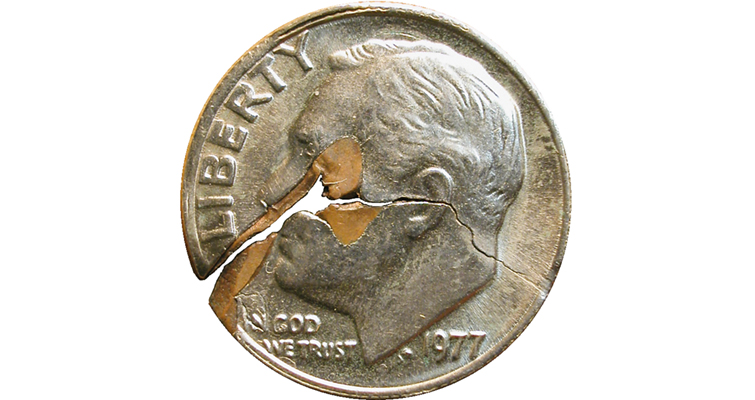 A few weeks ago (Aug. 31 issue) I devoted a column to split planchet errors. These are blanks, planchets, or coins that have split along the horizontal plane, yielding two thin circular discs. When partial breakage instead takes place in the vertical plane or along a steeply oblique plane, the defect is designated a “cracked planchet.”

A blank or planchet can crack before, during, or after the strike. While the last two circumstances actually produce a “cracked coin,” that term has never been adopted.

A 1945 Winged Liberty Head dime shows a planchet crack that extends from the obverse edge at about 1:30 to the front edge of Liberty’s helmet. As with all genuine planchet cracks, the defect is also seen on the reverse face. If a crack is seen on only one face, it’s undoubtedly a superficial “lamination crack.”

If a crack is present before the strike, or forms during the strike, the design will usually show areas of weakness on one or both sides of the crack. This is true of our dime’s obverse design rim, which shows weakness where the crack crosses it. On the reverse, the crack runs through the letters of UNUM, which caused the lower half of that word to strike up poorly.

A crack that develops after the strike will have no effect on the design.

A pre-strike crack that propagates from edge to edge results in a pair of “broken planchets” that may be subequal or very unequal in size. Coins that break after the strike are known as “broken coins” (see the March 14, 2011, and Dec. 17, 2012, columns for more information).

Cracked planchets can reflect the presence of contaminants in the alloy or coin metal that is abnormally hard and brittle. Brittle metal can be caused by subsurface contaminants, a poorly mixed alloy, or a failure to anneal (heat-soften) the blank or planchet. A combination of such factors is also a possibility. Whatever the cause, cracked planchets are considerably less common than split planchets in cents and 5-cent coins. The reverse holds true for 90 percent silver coins.

Cracked planchets are easily confused with other errors that take the form of narrow ruptures.

Radial stress splits in lightly stressed coins are also caused by brittle metal. Seven short radial stress splits extend in from the edge of a broadstruck 1994-P Roosevelt dime that is only moderately enlarged. The expanded periphery experienced brittle failure when subjected to circumferential tensile stresses produced during the strike. Stress splits are short and generally restricted to the expanded periphery of a coin struck out-of-collar. Planchet cracks tend to be longer, are not consistently radial in their orientation, and are most often found in coins struck within the collar. While planchet cracks can be generated or exacerbated by the strike, they seem unconnected to obvious sources of tensile stress.

Tensile stresses and brittle metal both contribute to yet another kind of narrow planchet deficit — the rolling-induced fissure. As coin metal is rolled out, internal tensile stresses can generate small tears within the strip. The illustrated 1978 Lincoln cent shows two such fissures — the only example I know of in which more than one fissure is present. The facing edges of each fissure are beveled, a characteristic seen in the majority of such errors.

The crack extends through both obverse and reverse clad layers. This demonstrates that, unlike plywood, the tri-laminar structure of the coin does not impede the propagation of cracks. Once the two clad strips are bonded to the core strip, the resulting composite strip and the blanks derived from it form a functionally solid body.