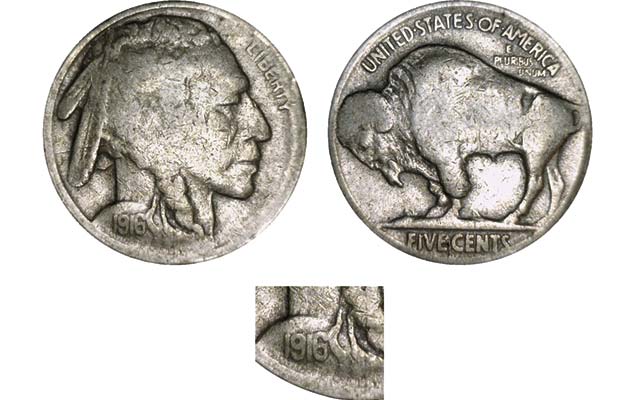 The missing F designer’s initial below the date on this fake 1916-S Indian Head 5-cent coin is not the result of wear, but is from loss of detail in the transfer process while making the die.

Detecting Counterfeits column from the Aug. 10, 2015, issue of Coin World:

One of the initial steps in the authentication process is to determine if a given coin is worth enough to attract the attention of a counterfeiter. A 1909-S Lincoln, V.D.B. cent, a 1916 Standing Liberty quarter dollar, and virtually any U.S. gold coin qualifies at this step. A 1916-S Indian Head 5-cent coin does not. Coin Values lists a price of $15 for the 1916-S in Very Good condition, a value that would be off the radar for any self-respecting counterfeiter.

Despite this, we have the example illustrated here. It drew the attention of the ANACS graders when we inspected it for the requested variety of “Missing Designer’s Initial,” a popular die variety in the “Buffalo nickel” series. On a genuine coin, the F below the date (for designer James Earle Fraser) disappeared due to overpolishing of the obverse die.

On this fake, the F is not visible, but due to a loss of details from the transfer process, where the design of a genuine coin is transferred to a set of fake dies. If the transfer process is performed properly, nearly all of the fine details end up on the fake dies — if the process is done poorly, the result is a less deceptive counterfeit.

Another diagnostic for this counterfeit is a straight die crack on the obverse, running diagonally from the rim at 8:30 to the back of the Indian’s head. Genuine dies used to produce circulation strike coins rarely exhibit straight die cracks.

The weight, diameter and composition of this fake are all accurate, which is to be expected — there is no reason for a counterfeiter to deliberately reduce the metal content in a fake that contains less than 10 cents worth of copper and nickel.

Many counterfeiters purchase genuine unstruck U.S. Mint blanks from the error community for their product, ensuring that the specifications will be correct.