Counterfeit 1802/0 half cent not struck but cast from molds 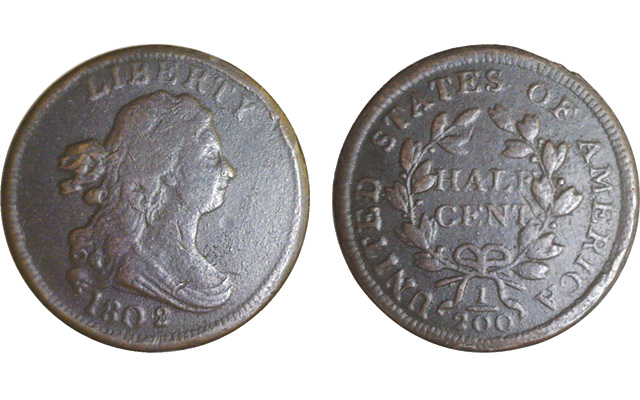 The counterfeit 1802/0 Draped Bust, Reverse of 1802 half cent shown here is a cast produced from fake casting molds, not a struck counterfeit made from fake dies.

The coin is cataloged as Cohen 2 in Roger S. Cohen Jr.’s American Half Cents: the “Little Half Sisters.”

Coin Values prices this variety at $2,250 in Very Good 8 and $5,000 in Fine 12, making it an obvious target for counterfeiters and alteration experts.

Very few 1802/0 half cents exist in choice condition, no matter the amount of remaining details — the average example is damaged and corroded, and a number of the remaining genuine pieces have been repaired.

The counterfeit shown here is a cast produced from fake casting molds, not a struck counterfeit made from fake dies. Both the obverse and the reverse design details match those of a genuine coin, indicating that an authentic 1802/0 half cent was used to produce the fake molds. After this counterfeit was made, it appears to have been deliberately “roughened up” to exhibit a more natural appearance. This process was successful, as the fake looks exactly like a genuine example at first glance.

Many cast fakes can be detected by closely examining the edge of the coin for a seam, where the two casting molds were joined together. The seam for this particular fake is the junction of the obverse rim and the edge, and this seam was then hidden by damage. Notice how the obverse rim has been flattened in several areas, especially around 2:00.

Since the rough, corroded surfaces make it difficult to accurately assess the coin, other methods need to be employed.

For some reason, many cast counterfeits of early U.S. coins are well outside the normal weight range for a genuine coin. The standard weight for a genuine 1802 half cent is 5.44 grams, with most circulated pieces weighing between 5.0 and 5.4 grams. This cast fake weighs 7.45 grams, which is much too heavy. Unfortunately, the average collector will not have an accurate scale on hand when inspecting potential purchases at a coin show or other venue.

For this reason, I strongly recommend that collectors deal either with a well-respected copper specialist or one of the major grading services when adding a rare copper coin to their collection.