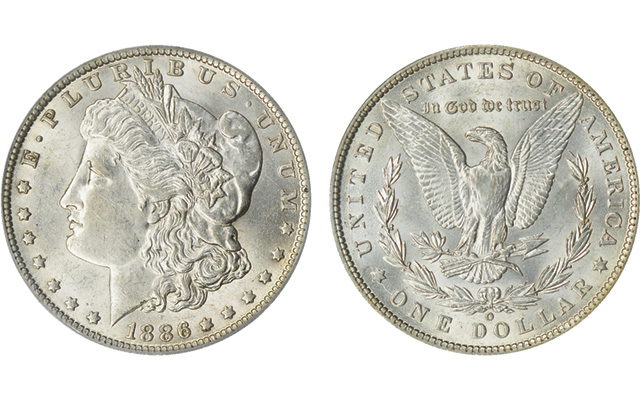 The story: The 1886-O Morgan dollar is a tricky coin. It has a high mintage of 10,710,000 pieces and in well-circulated grades is considered a common coin. Its scarcity starts in grades of AU-50 and in Mint State is a very tough coin. In MS-64 and MS-65 it is a rarity, with Professional Coin Grading Service registering 213 at the MS-64 level, although many of those are likely resubmissions hoping for an MS-65 grade. PCGS has graded just two in MS-65, with one selling for $152,750 at a Heritage auction last year.

The piece from the Capuano Collection in AU-58 with a green Certified Acceptance Corp. sticker is a solid, budget-minded alternative to a low-level Mint State piece for a collector, and it brought $363.

That price is substantially more than similarly graded examples without a CAC sticker have brought at recent auctions, with a PCGS AU-58 (non-CAC) example selling for $217.38 at a Dec. 9, 2014, Heritage auction. That example had several marks on the cheek (a prime focal area on the coin), which may have turned off potential buyers as PCGS AU-58 examples typically bring $260 to $300 at auction.