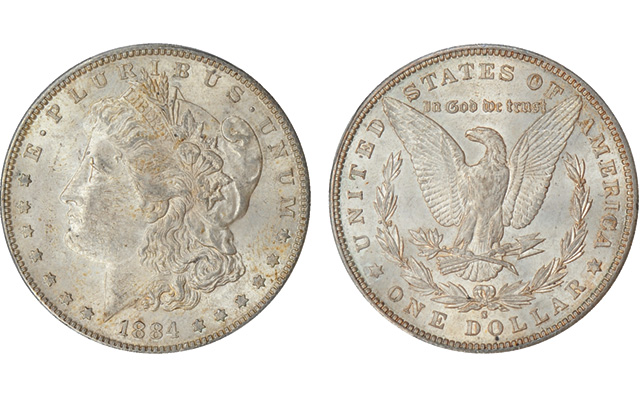 An 1884-S Morgan dollar graded AU-58+, CAC, is about as nice as an About Uncirculated coin gets. At $5,500, it brought roughly three times what an average AU-58 coin would sell for at auction.

The story: The market considers that an AU-58+ coin with a Certified Acceptance Corp. sticker is about as nice as an AU coin can be. This 1884-S Morgan dollar graded Professional Coin Grading Service AU-58+, CAC, brought $5,500 at the Dec. 21, 2014, GreatCollections.com auction of the Capuano Morgan dollar set, and was the top coin in the collection. In fact, it was the lone coin that sold for more than $1,000.

An MS-60 example sold for nearly $10,000 at a Nov. 6, 2014, Heritage auction. So, with the Capuano coin, a bidder paid nearly three times what one would expect a “basic” AU-58 example to realize, yet paid roughly half of what a base-level Mint State coin would sell for.