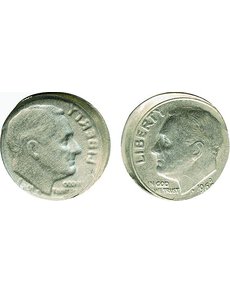 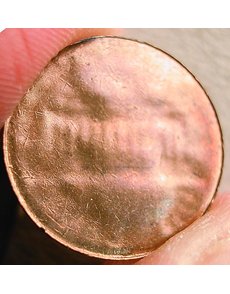 An incuse ghost of the Lincoln Memorial was formed on the obverse face of this split-before-strike planchet when it was struck beneath a second planchet. While not shown here, the opposite face of this and the other three coins displays a normal die-struck design. 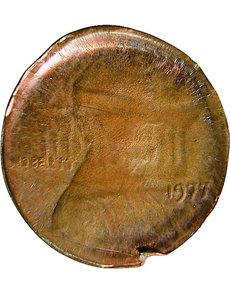 An incuse Lincoln Memorial formed on the obverse face of this abnormally thin 1977 Lincoln cent when it was struck a second time beneath an incoming planchet. 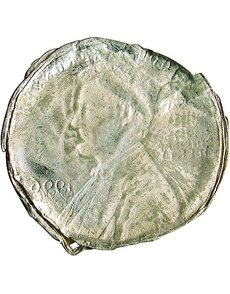 This 1996 Lincoln cent is the detached base of an obverse die cap. It shows evidence of four distinct strikes, with rotation between each strike. The last strike left a clear incuse ghost image of the obverse design on the reverse face. 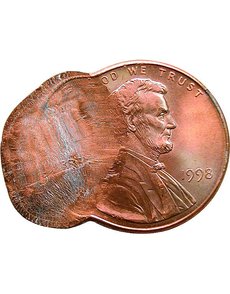 An unusually strong off-center uniface strike left this 1998 Lincoln cent with a clear ghost image of the Lincoln Memorial on the obverse face of the second strike.

Flash any error collector an image of an extensive, incuse mirror-image and the first candidate explanation that comes to mind is a brockage. A brockage is formed when a coin (or any piece of die-struck, hard material) is driven into a planchet or another coin.

However, the incuse mirror-image on the reverse face of the illustrated 1969-D Roosevelt dime is not a brockage. It is instead an incuse ghost image.

This is a copper-nickel clad layer that either separated from an off-center dime after the strike or that entered the striking chamber on top of a normal dime planchet. While these two possibilities cannot be disentangled, the effect on this exceedingly thin and lightweight (0.37 gram) disc is the same. The side of the disc that was in direct contact with the obverse die molded itself to the recesses of the die face. The side that was in contact with the underlying planchet (or that was loosely adherent to the copper core) also sank into the recesses of the obverse die.

Any thin disc that enters the striking chamber together with another planchet will obey the same principle. This is illustrated here by an undated Lincoln cent that started out as a split-before-strike planchet. Weighing 1.54 grams, it was inserted into the striking chamber beneath another planchet. The resulting in-collar uniface strike (full indent) left the coin with an incuse ghost image of the Lincoln Memorial on the obverse face.

A similar-looking incuse Lincoln Memorial formed under somewhat different circumstances in the double-struck 1977 Lincoln cent presented here. This 1.58-gram example entered the striking chamber as a rolled-thin or split-before-strike planchet. The first strike left it with a die-struck design on both faces but no ghost image. The second strike took place beneath a planchet. This flattened the die-struck obverse design and generated the incuse ghost Lincoln Memorial.

A coin that is thinned by multiple strikes against a succession of planchets will gradually develop a clear incuse ghost image. That’s what happened to the multi-struck 1996 Lincoln cent shown here. Weighing only 0.24 gram, its reverse face shows a mirror image of the obverse design. This demi-coin is the detached bottom of a late-stage obverse (hammer) die cap. The copper plating was completely worn away as the cap’s working face struck a series of planchets. Detached cap bottoms are often mistakenly assigned to an error type that doesn’t even exist among copper-plated zinc cents — the “split-after-strike shell.”

A planchet or coin of normal thickness can also develop an incuse ghost image if it receives an unusually strong off-center uniface strike that reduces its final thickness to a fraction of its original girth. Illustrating this phenomenon is a double-struck 1998 cent in which the second strike was 60 percent off-center, with the obverse face covered by a planchet. A strong incuse ghost image of the Lincoln Memorial has formed on the obverse face.

Distinguishing an incuse ghost image from a brockage is usually not too difficult. Most brockages show at least some expansion, while a ghost image is never expanded. Fine details are muted or lost in a ghost image, while they’re usually clear in an unexpanded, first-strike brockage. In a ghost image, it is often the centrally located, highest-relief portions of the design that are easiest to recognize (they may, in fact, be the only recognizable elements). The final factor to be considered is thickness. The thinner the metal, the clearer the ghost image. Usually the opposite is true of brockages. A planchet or coin thinned by the strike will generally show an expanded and distorted brockage.