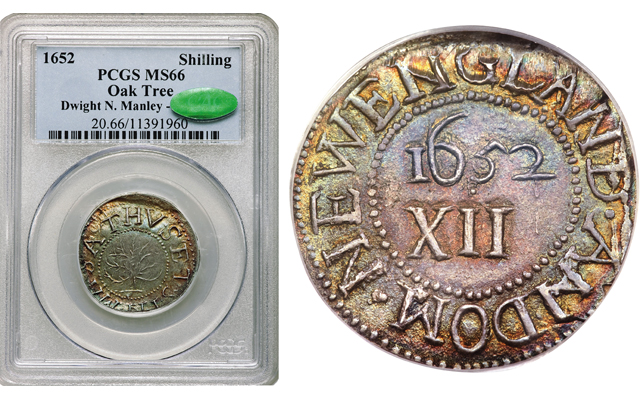 This 1652 Oak Tree shilling has a green CAC sticker on the obverse side of its Professional Coin Grading Service holder. The coin’s reverse is shown out of the PCGS holder.

Certified Acceptance Corp. will no longer accept Colonial coinage for “stickering” as of Jan. 1, 2015.

A Dec. 10 Twitter post from CAC indicated the company “will remain an active buyer of CAC Colonial coins.”

“They are just so different. We’ve been doing this for eight years and the colonial community hasn’t really embraced us,” said John Albanese, founder of CAC.

CAC verifies previously graded coins and awards its green sticker to those possessing quality within the grade.

Albanese is also the co-founder of Professional Coin Grading Service and founder of Numismatic Guaranty Corp.

“Essentially for something like the last three years I’ve been saying we’re going to pull the trigger [to stop stickering colonial coins],” Albanese said.

He said he is comfortable with the Colonial coins his company has stickered but their striking makes it difficult to have a standard grading approach.

“Colonials, the way they are struck they are just too crude [for an overall standard],” Albanese said. “There are so many vagaries in the minting process I cannot get a consensus on what should be stickered and what shouldn’t.”