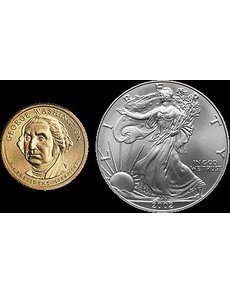 Fresh from the U.S. Mint, a Presidential dollar will usually not have a grade as high as an American Eagle silver dollar. Special care is taken in producing collector/investor coins, in contrast with striking coins for circulation.

What grades are coins when they are first issued by the U.S. Mint? Are they Mint State 60, Proof 60, etc.?

All coins struck by the U.S. Mint should be considered Uncirculated when first issued. Thus, they would grade Mint State 60 or Proof 60 at the very least.

On the 70-point grading scale commonly used in the hobby, an Uncirculated coin is one graded on a range from 60 to 70, with the prefix “MS” denoting Mint State coins, and “PF” signifying Proof coins.

With that in mind, grade norms come into play that depend on each particular coin series, involving how the coins are struck and how they are handled by the Mint following their striking.

Coins minted specifically for collectors, such as commemorative coins, Proof set coins or silver and gold bullion coins, typically are struck using specially treated dies and are handled and packaged with much more care than a coin intended to circulate in commerce.

For example, collectors will find most commemorative coins and collectible American Eagle silver and gold coins exist in the higher Mint State or Proof grades, usually no lower than MS-68 or Proof 68 and most often in MS-69, MS-70, Proof 69 or Proof 70 condition.

However, a collector who has opened a roll of Uncirculated Presidential dollars, for instance, will see that these coins usually are in nowhere near a high Mint State grade, with the majority in the low- to mid-Mint State grades straight out of the roll.

These grade norms can be confirmed by coins graded and encapsulated by the third-party grading services. For example, Professional Coin Grading Service’s Population Report and Numismatic Guaranty Corp.’s Census show that the vast majority of American Eagle silver coins submitted to the services are graded MS-68 to MS-70. In contrast, most of the Presidential dollars submitted receive MS-64 to MS-66 grades.

Learning the grade norms particular to a coin series is an important factor that collectors should take the time to study. Grade norms can be applied to every series of coins struck by the U.S. Mint, both modern and classic. Ultimately, it helps signify the degree of rarity of a given coin within a specific series, and, in turn, helps determine that coin’s value.