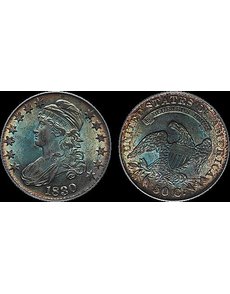 This 1830 Capped Bust half dollar graded About Uncirculated 58 by Professional Coin Grading Service sold for $1,726.15 earlier this year — the same price as one would expect a mid-level Mint State piece to bring.

About Uncirculated 58 coins are some of the most challenging coins to price in today’s marketplace since they can sell for widely different prices when offered.

Coins in AU-58 aren’t quite Mint State — typically there’s a bit of rub on the high points that precludes an Uncirculated designation — but they’re close.

As Gerry Tebben wrote in his June 18 Coin World column, “The rub, so to speak, is that almost every collector would pick a raw AU-58 coin over a raw MS-60 coin, especially if he wasn’t using a 40-power glass. The best AU-58 coins are MS-65 coins with a brush of disturbed luster.”

At auction, AU-58 coins bring unpredictable prices, generally due to differences in quality between coins with the same numerical grade.

However, an 1830 Capped Bust half dollar of a common variety graded AU-58 ? by Numismatic Guaranty Corp., with a Certified Acceptance Corp. sticker (that indicates quality within a grade), sold for a hearty $1,410 at a Sept. 8 Heritage auction. The next day, a more typical quality 1830 half dollar graded NGC AU-58 sold for half that, at $705. Another outlier is a gorgeously toned 1830 half dollar graded AU-58 by Professional Coin Grading Service that sold for $1,726.15 at a Jan. 8 Heritage sale.

Those prices look especially robust next to average MS-62 examples that sell at the $1,000 to $1,200 level at auction.

How does one reconcile these extremely high prices for a few exceptional coins? First, one looks at each transaction individually and considers how it fits into the general trend. Examine factors that would support an unusually big price, such as the potential for an upgrade (moving the coin from the AU to MS level), or terrific visual quality.

As this column has said many times, one trade does not make a market, but looking at the huge variances in the Capped Bust half dollar series in AU-58 shows the growing price differences between average and exceptional coins in today’s market. ¦