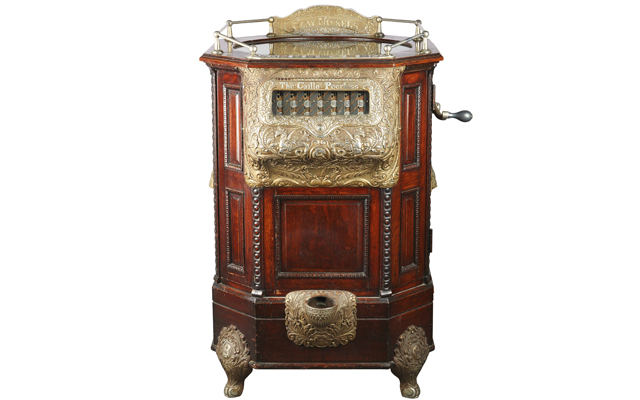 A Caille Brothers Co. Peerless 5-cent floor roulette slot machine set a record with a price realized of $300,000 in Morphy Auctions' May 1 to 3 sale. 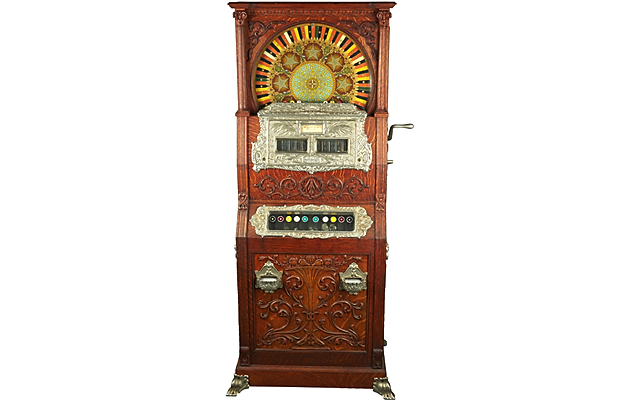 70-inch-tall Mills Duplex deluxe upright slot machine made in 1899 still retains its original tin wheel and is one of the finest examples of its kind known. It realized $108,000 in the May 1 to 3 Morphy auction. 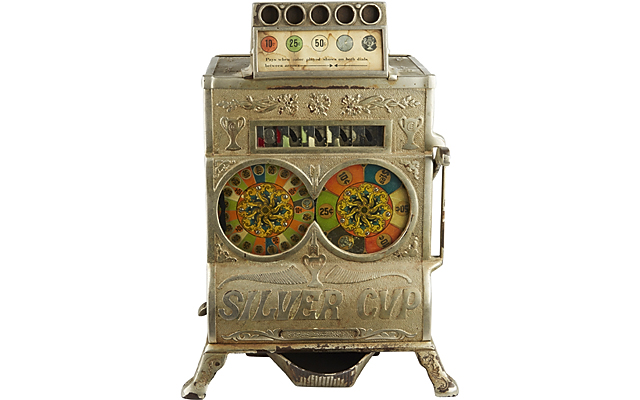 Morphy Auctions hit the jackpot during its May 1 to 3 sale in Las Vegas when a Caille Brothers Co. Peerless 5-cent floor roulette slot machine realized $300,000.

The embellished nickel-on-oak slot machine was the top dollar getter in the sale of antique coin-operated machines, gambling machines and advertising memorabilia that brought a combined $3.7 million, according to the auction firm.

Among the other mechanical slot machines that brought strong prices were:

??An imposing 70-inch-tall deluxe model Mills Duplex upright slot machine made in 1899, retaining its colorful original tin wheel, and is, like the Caille Peerless, one of the best preserved of all known survivors, $108,000.

The record-setting example is the finest among approximately 30 examples known and is original, without having been subjected to any professional restoration, Sidlow said. The machines were built to be used in gaming play so most examples known have considerable wear.

The machine has a multicolored roulette wheel behind glass on the top of the machine, and players could chose from up to seven slots into which to insert a 5-cent coin, with the pay-out odds listed for each. Sidlow said a player could insert coins into each slot.

After insertion of a coin or coins, turning the crank on the right side of the machine triggers the roulette wheel to rotate and also ejects a ball that will drop into a slot on the wheel once the wheel stops. If the ball drops into one of the slots for which a player has placed a bet, the slot machine will release the jackpot into the tray below.

Sidlow said this  type of turn-of-the-20th-century slot machine was played well into the 1960s, and 1970s in some instances. Sidlow said although the odds on the machines were always tilted in favor of the casinos, Nevada gaming laws required the machines to pay out a minimum percentage of the money taken in.

Players had 10 sets of odds to play and could see through the glass windows the number of coins in each window that could be won with a successful play. After inserting a coin or coins, the player would turn the crank on the right side of the machine, releasing the wheel to begin its rotation.

If the arrow points to the player’s odds selection on the roulette wheel when the wheel stops rotating, the jackpot is released to a tray at the bottom of the machine.

The Caille Silver Cup slot machine is an example of a slot machine than can be placed on a counter for gaming play, Sidlow said.

Also a 5-cent slot machine, the Caille Silver Cup allows players to put 5 cent coins in up to five slots, with the lowest payout at 10 cents and the highest being the $2 Silver Cup.

Once coins for gaming play are inserted into their desired slots, the player pulls down a lever than releases two colored wheels that rotate in opposite directions. Each wheel bears indicators corresponding to the potential payout.

If, when both wheels stop their rotation, the indicators on both wheels match in the area between the arrows in the center of the front of the machine, the machine pays out the jackpot indicated.