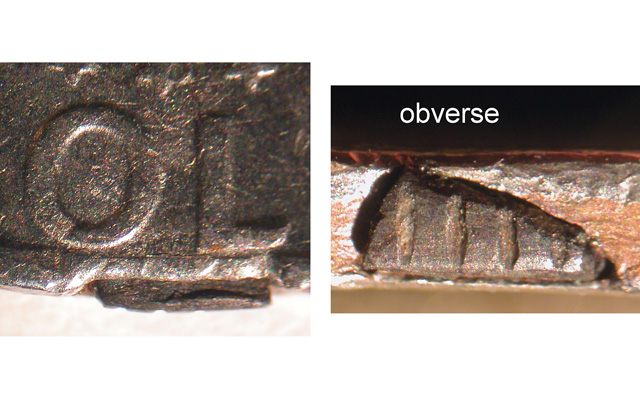 A small nodule of hard, black metal (presumably steel) is embedded in the edge of this 1998-P Kennedy half dollar. It was probably squeezed into the edge of the blank during the upsetting process. 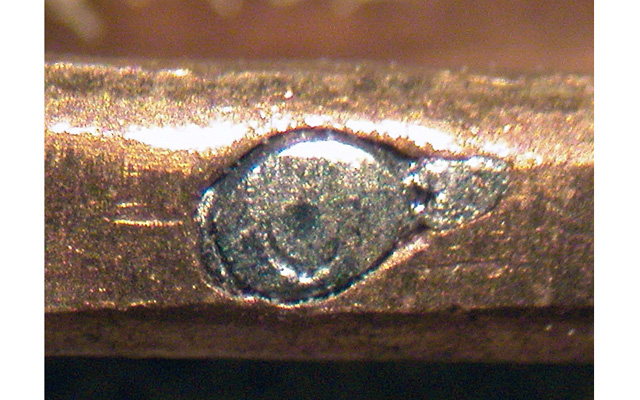 A small, subcircular metal pellet is embedded in the edge of this 1968-D Lincoln cent. Likely composed of copper-nickel, it was almost certainly forced in during the upsetting process. 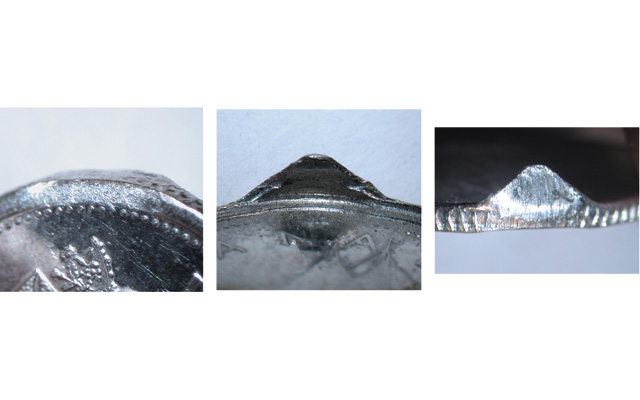 This 1999 Canada 10-cent coin displays a rare obstructed collar error. The foreign matter deformed the coin’s edge, generating a rounded shoulder on the obverse face (struck by the anvil die), and a tall, thin, vertical flange on the reverse face.

He drew attention to a black nodule embedded in the coin’s edge at 5:30 (reverse clock position). The nodule has well-developed reeding and is strongly attracted to a magnet.

While we probably can’t establish the origin of the nodule, we can at least take a crack at figuring out when and where it embedded itself in the coin. Let’s start out by eliminating those scenarios that are least likely.

Since part of the nodule is hidden, one might speculate that this is the proverbial “tip of the iceberg” and that a significant portion extends deep into the copper core. If so, it could be an intrinsic metallic inclusion that originated when a steel fragment fell into a crucible of molten copper or the still-molten ingot. Or it could be a bit of iron-rich slag that wasn’t skimmed off the top of the molten copper.

A deeply penetrating foreign element that doesn’t disrupt either clad layer could also represent a foreign object that was rolled into the copper core strip before bonding.

Both hypotheses can be dismissed because the magnetic signature doesn’t extend into the body of the coin. The magnetic pull is essentially restricted to the visible portion of the nodule.

The nodule must therefore have been introduced much later in the production process. I suspect it was squeezed into the edge of the blank during the upsetting process. An earlier example of such an error was reported in the Sept. 6, 2010, Collectors’ Clearinghouse.

That case involved a roughly circular pellet of presumed copper-nickel found embedded in the edge of a 1968-D Lincoln cent. A photo is reproduced here.

The upset mill forces the edge of a cent planchet to become the cross-sectional shape of a low trapezoid (flat-topped triangle). The cent coin’s pellet is located in the center of that trapezoid, which was not entirely remodeled by the strike. The pellet is also equidistant from the obverse and reverse design rims. Both observations are consistent with a squeezed-in error.

I can’t entirely eliminate the possibility that the half dollar coin’s steel nodule was struck into the edge. The nodule could have slipped into the narrow gap between the collar and the edge of the half dollar planchet. The visible portion of the nodule is 0.5-millimeter wide as measured by an ocular micrometer. If the total width of the nodule (visible plus hidden portion) isn’t much wider than this, then it’s just possible that the nodule had enough room.

Then again, if this scenario were valid, I would have expected the planchet to have been nudged against the collar at the opposite pole. This, in turn, should have left the rim slightly wider in the vicinity of the nodule and narrowest at the 11:30 reverse clock position. This is clearly not the case. The planchet was well-centered when struck and the design rim is the same width all around.

An example of an “obstructed collar error” is seen here on a 1999 Canadian 10-cent coin. A foreign object or accumulation of foreign matter clogged the ridges on the working face of the collar and bulged slightly into the striking chamber.

Whether squeezed-in or struck-in, the foreign object should have added some weight to the coin, although it’s doubtful such a small mass would change the value significantly. Reinforcing the irrelevancy of the added mass, the 1998-P Kennedy half dollar proved to be slightly underweight at 11.25 grams (average is 11.34 grams). Even so, the coin falls within the normal range of variation for its denomination.